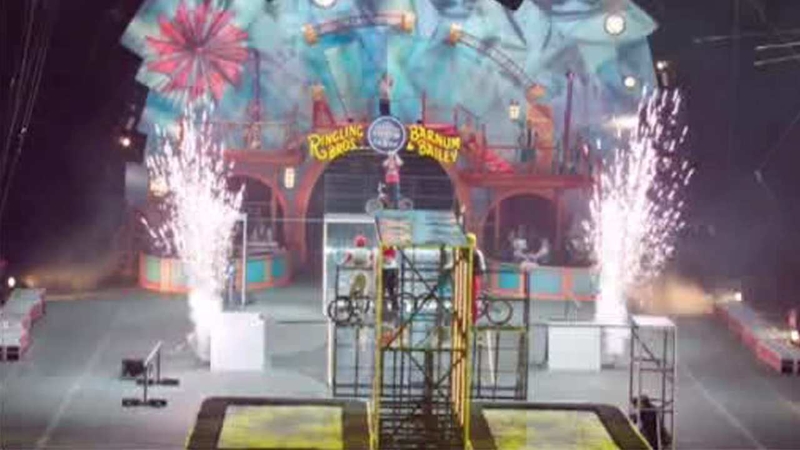 UNIONDALE, Long Island (WABC) -- It's not so much the breathtaking balancing acts, or the psychedelic lights and acrobats dangling in the sky.

The parents who bring their kids to the show will tell you, what it's really all about is seeing those little faces light up.

"There's so much talent and time and energy that goes into all these shows," said Kristen Matthews, a parent.

But after 146 years the Ringling Brothers Barnum & Bailey Circus is calling it quits.

Soon there will be no more clowns or dangerous dirt bikes.

So for the Matthews family and so many others, the final run at the Nassau Coliseum was a priceless opportunity.

"It's just spending time together and seeing the show. It is the last chance," Kristen said.

"It's very cool to see all the animals and how people train them," said Kaci Matthews, spectator.

But you see it was that very thing that drew so many to this show, the animals, and that may be what lead to its curtain call.

Declining sales are causing it to shut down.
It had been skating on thin ice...

The circus is under fire from animal rights activists.

"Lions are still being whipped and caged. Go to Ringlingbeatsanimals.com and see for yourself. Don't be fooled, Ringling still hurts animals," a protester said.

Outside the Coliseum, a different kind of show had been following the circus around.

A show of disgust, and they have been persistent.

"A lot of cold nights out here. A lot of people berating you, being nasty to you, thinking you're messing with their kids' entertainment. But animals aren't entertainment. We're just trying to educate people out here about that," said Michael O'Neill, a protester.

Protesters dubbing it the cruelest show on earth, and they say their work is far from done.

"The nightmare of Ringling's animal abuse is coming to an end. But it's not over for the animals. There are other animals being abused in all sorts of circuses and there are no plans to retire these animals to sanctuaries," said John Di Leonardo, PETA.
But no matter what side of the fence of this debate you stand on, one thing is clear, the Ringling Brothers Circus was passed down from generation to generation.

"A family tradition," the Matthews said.

And it will be the end of an era for "The Greatest Show on Earth" to be no more.