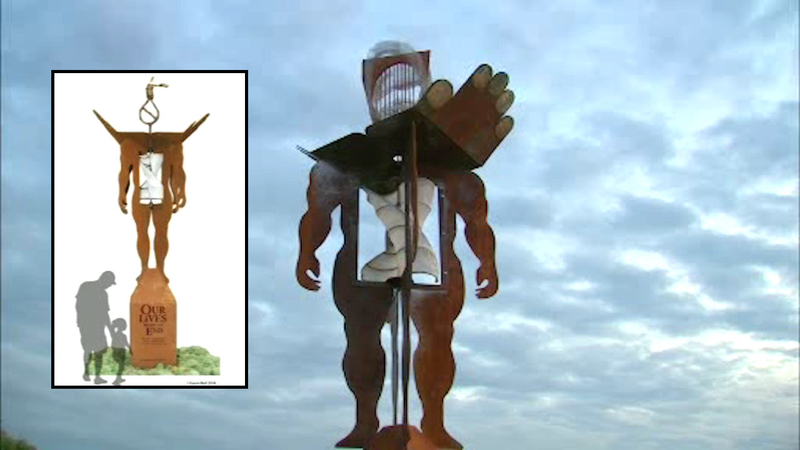 NEW YORK (WABC) -- Art is sometimes used to push our boundaries in pursuit of getting our attention and question our beliefs and actions.

One artist is doing that with a new sculpture at Riverside Park in Manhattan. Soon the sculpture will undergo another change, one that some say is far too controversial.

The sculpture stands there now -- a sculpted, iron figure that says almost nothing.

"From the initial concept, I've had a noose," said Aaron Bell, the artist.

This is what, "Stand Tall, Stand Loud" is supposed to look like. It was designed by artist Aaron Bell with a noose on top, a silent, poignant protest against hate.

The Parks Department liked Bell's sculpture, but thought the noose was a bit much for the children and families walking through the park.

So they commissioned the piece without the noose, and at one point even suggested Bell use a heart shaped noose.

"This is not a hate or love thing, this is a clear denouncement against hate, period. You're talking about some heart, this is not a kumbaya moment," Bell said.

Bell speaks softly. When he was in his 20s, he was beaten up by a group of young, white men and it cost him a vocal cord. They could quiet his voice a bit, but they couldn't silence him. The Parks Department, as it turns out, couldn't either.

"Yesterday at 2:00 at the arsenal, we went and met. And in 10 minutes time, I got a public apology, they realized that they were wrong," Bell said.

It will take a couple weeks for the sculpture to be completed. As for the delicate sensibilities of the people of Riverside Park, come on. This is New York.