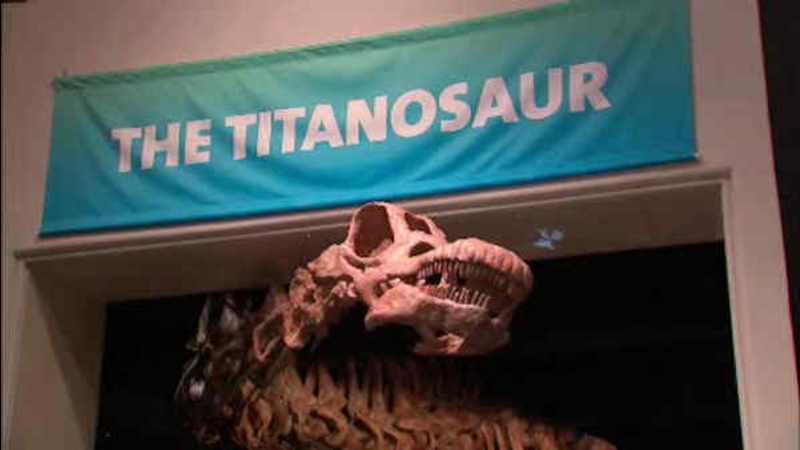 It is the largest dinosaur ever discovered, so big that it doesn't even fit entirely in one room.

Everybody loves dinosaurs, but to see the biggest ever right in their own neighborhood was huge for those in attendance.

It was monster talk from the fourth graders from PS 197 who got the first look, and self-proclaimed dinosaur expert Alan Callaway says it's a must see.

"The top is like just two inches from touching the ceiling," he said. "If it was just a little bit higher, you would probably need to take out ceiling and then build it again after you build the skelton because it's just so huge."

It actually weighs as much as 10 elephants -- around 70 tons -- and measures longer than a blue whale at 122 feet.

During the 18 month long dig, researchers found 70 percent of the skeleton, and such a tremendous specimen took away a sizable amount of guess work. But the the biggest fossils are actually too heavy to mount, and so the life-sized display is 3D prints of fiberglass.

The titanosaur roamed freely across Patagonia 100 million years ago, but fitting the enormous fossil display into a modern building -- even the vast museum -- took an epic effort.

"There was a moment when we didn't think part of it would fit in the garage," museum president Ellen Futter said. "There was another moment when it was having trouble getting into an elevator. And remember, we have elevators that are big enough for elephants, so this is not a minor elevator."

The massive project left the dinosaur ducking its head out the door.

"We struggled with just fitting him in, and in order to do it, we had to crouch him down," Futter said. "He's actually taller than this. The ceiling goes up to 19 feet, and he's just about at it."

Still, even scientists are skeptical that this will be the last bigshot find.

"This is probably a young adult, so it's not even full grown," paleontologist Michael Novacek said. "There may be bigger dinosaurs found in the future. We don't know."