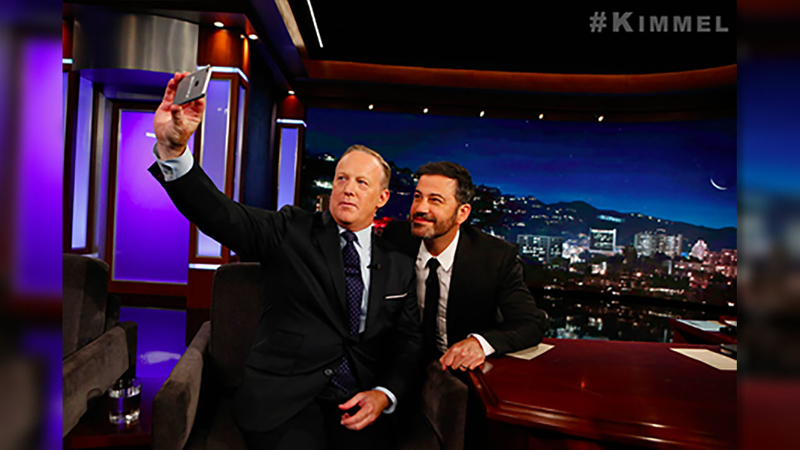 Kimmel welcomed Spicer a week after the talk show host tweeted an old photo with the U.S. Navy reservist, asking, "If I learn to look at the camera, will you come by the show?"

Dear @SeanSpicer - if I promise to look AT the camera this time, will you come to my show next week? pic.twitter.com/KcVA5xUzeC

During the interview, Spicer took on questions concerning the inauguration crowd for his former boss, President Donald Trump. The day after the inauguration, Spicer sparred with the press corps over coverage, claiming it was the biggest crowd to ever attend an inauguration.

"The president wanted to make sure the record got set straight," he said.

"Why is he so concerned with size?" Kimmel returned. "Have you ever seen the president naked?"

Kimmel pressed him about whether he agreed with the president during that first press briefing.

"Your job as press secretary is to represent the president's voice. And to make sure that you are articulating what he believes his vision is on policy, on issues, on other areas that he wants to articulate. Whether or not you agree or not isn't your job," he said.

He also talked about his relationship with the press, saying of the first press conference about the crowd size, "I don't think it was probably the best start."

"I think there is a time that we can start taking down the temperature and getting back to a more constructive and civil dialogue," he said. "I think we could all use a dose of that."

Spicer also was asked for his thoughts on Melissa McCarthy's bombastic portrayal of the former White House press secretary on Saturday Night Live, which he admitted he found "kind of funny."