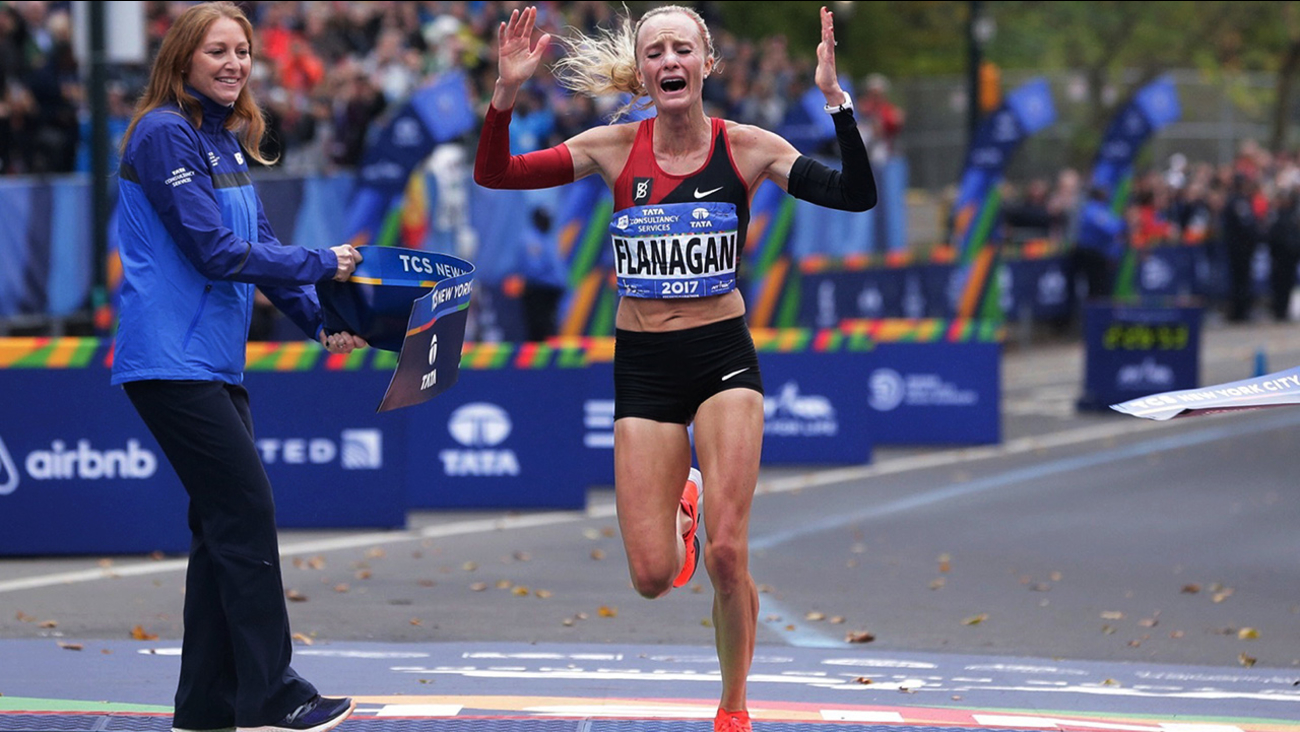 NEW YORK CITY (WABC) -- Former champion and U.S. Olympic medalist Shalane Flanagan announced on Instagram Monday that she is retiring and will join the broadcast team for the 2019 TCS New York City Marathon, which will be broadcast live on WABC-TV on Sunday, November 3.

Flanagan, who in 2017 became the first American woman in 40 years to win the New York City Marathon's open division, will serve as a lead commentator.

"Instead of chasing a podium finish this year at the 2019 TCS New York City Marathon, I'm honored to join an incredible broadcast team and take the next step in my career journey," Flanagan said. "I'm looking forward to sharing my insights on the race and the amazing athlete performances, and being a voice for runners from all over the world. See you at the finish line."

The event will be broadcast on ESPN2 nationwide. WABC-TV and ESPN have been home to the award-winning broadcast of the world's largest marathon since 2013.

The race will be available globally in more than 170 countries territories and in over 725 million homes through various international broadcast partners.

The 49th running of the race will also stream live on abc7ny.com, and the ABC app in the New York City viewing area and the ESPN App nationally.

The broadcast, produced in coordination with Endeavor Content and distributed by IMG Media, will feature 16 commentators, reporters, and analysts. Leading the call will be ESPN's Sage Steele, serving as the race-day host for the fourth consecutive year, and John Anderson, calling the play-by-play for the seventh consecutive year. Analyst Tim Hutchings and Flanagan will join them in the booth

Covering the leaders and reporting along the course will be three-time New York City Marathon winner Paula Radcliffe for the men's open division and U.S. Olympian Carrie Tollefson for the women's open division. The group will be joined by a talented array of reporters at the start, finish and along the course, including ABC7's Ryan Field, Sam Ryan, Amy Freeze, Anthony Johnson, Kemberly Richardson, Michelle Charlesworth, and Josh Einiger.

The international feed will feature Paul Swangard calling the play-by-play with commentary from Juli Benson.

In addition to the coverage of the professional races, the broadcast will feature athlete interviews, race-week highlights, and a compelling feature on Team #MovedMe runner Micah Herndon, the U.S. Marine veteran who crawled over the Boston Marathon finish line this year.

Viewers will get an in-depth look at runner biometric data through Performance Metrics Powered by TCS. Ten notable runners will wear a small electronic device that will collect real-time data for in-race analysis. "Sports Science" host John Brenkus will break down the Performance Metrics live in the broadcast, which will feature professional athletes Roberta Groner, the top American at the 2019 IAAF World Championships Marathon, and Craig Leon; former New York Giants football stars Tiki Barber and Jason Sehorn; U.S. Olympic gold medalists Kikkan Randall and Taylor Ritzel; The Bachelorette's Andi Dorfman; and NYRR president and CEO Michael Capiraso, who will be running in his 28th consecutive New York City Marathon. The data will focus on heart rate, breathing rate, and cadence and pace relative to the conditions of the course and environment, such as elevation, grade, and weather.