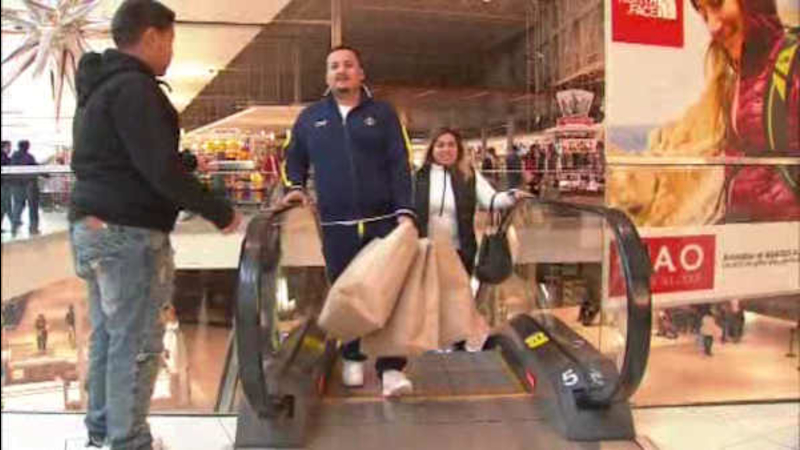 NEW YORK (WABC) -- Shoppers looking for deals to be thankful for got a jump on Black Friday by hitting the stores on Thanksgiving.

Among the stores open for Thanksgiving are K-Mart, which opened at 6 a.m. and Old Navy at 9 a.m.

In the evening, Best Buy, Macy's and Toys R Us opened their doors at 5 p.m., followed by Kohl's, Sears and Target at 6 p.m.

Many malls in our area opened Thanksgiving night, including the Queens Center Mall at 5 p.m.

In New Jersey, the Jersey Gardens mall in Elizabeth opened at 10 a.m. with long lines already snaking outside some of the stores.

For many shoppers, it is a new holiday tradition. Instead of stuffing turkeys, a lot of families are stuffing shopping bags full of goodies.

The general manager of Jersey Gardens says they've opened early for the past three years and each year they've seen steady growth in foot traffic, with more and more people taking advantage of early deals.

With some stores offering 70-75 percent off select items, it's hard to resist.

"The turkey's in the oven already, and they know they've got four hours so they race in here to get some of the buys," said Jersey Gardens general manager Denise Palazzo. "And the retailers have been great because what they're doing is they're offering the buys earlier and earlier for the customers."

Even with the early start Thursday morning Jersey Gardens will be open for 36 hours straight.

Other retailers decided to stay closed for Thanksgiving.

"It's just overall the cost/benefit isn't worth it," said Hitha Herzog of H Squared Research. "So might as well just shut down, let people hang out with their families, have fun, and re-open the next day. Because at the end of the day, everyone is going online anyway."

More than 137 million Americans are expected to shop this weekend in the hunt for the best deals of the season.