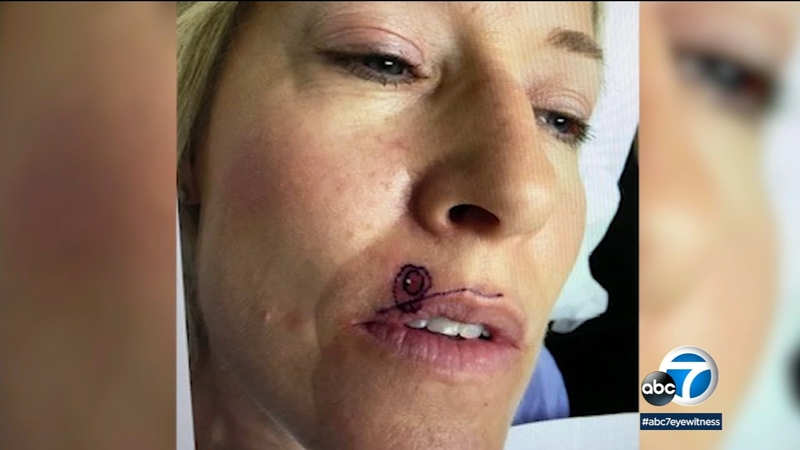 ARCADIA, California -- A woman says what she thought looked like a pimple above her lip was actually skin cancer. She is sharing her story as a warning for others.

Most of us are pretty good about knowing that we should use sunscreen. But actually using it, and using it correctly, is another thing.

Doctors say they're seeing more and more cases of skin cancer on places we tend to miss: eyelids, lips, and the tops of our ears. But skipping the sunscreen can lead to a dangerous situation.

It's something Tracy French knows all about. The Arcadia woman first noticed a small spot just above her lip.

"I would say it was roughly just under the size of a quarter," French said.

But it didn't raise any alarms with her.

French said, "It looked like a pimple then it would go away and then it would turn into a little scab and turn scaly. I kind of - for a little while - didn't think anything about it."

"It did look like a pimple at first, but then eventually it turned into something a little bit harder. It had a little scale on it," Dr. Chi explained.

The diagnosis: skin cancer in the form of squamous cell carcinoma skin cancer.

"We think it's because people are living longer. But also because we're probably exposing ourselves to more sun damage in way of pollution, because pollution decreases the atmosphere and so we're getting more radiation that way," Chi said.

A recent study found most people who use moisturizers with sunscreens tend to avoid their eyes and lip area possibly because its more greasy. But researchers found those who use sunscreen alone were more likely to target those areas.

"If you're going to be out and you need sunscreen, then what I would recommend is a sport sunscreen or even a stick sunscreen that goes on like a deodorant stick, because that tends to run less," Chi said.

And Dr. Chi also recommends using a lip balm that has sunscreen in it. Wear sunglasses and a hat whenever you go out, and keep some sunscreen in the car.

But the most important advice is to reapply your sunscreen frequently, every hour if you're gonna be outdoors. If you're with kids, make sure they do, too.

And if you have something that looks like a pimple that won't go away, ask your doctor to take a closer look.

"Come and see your dermatologist and get your whole body checked. Cause things can pop up, overnight, " Tracy said.

Tracy is thrilled that doctors were able to eliminate all of her cancer. But shes hopes others won't wait years to get anything suspicious checked out.