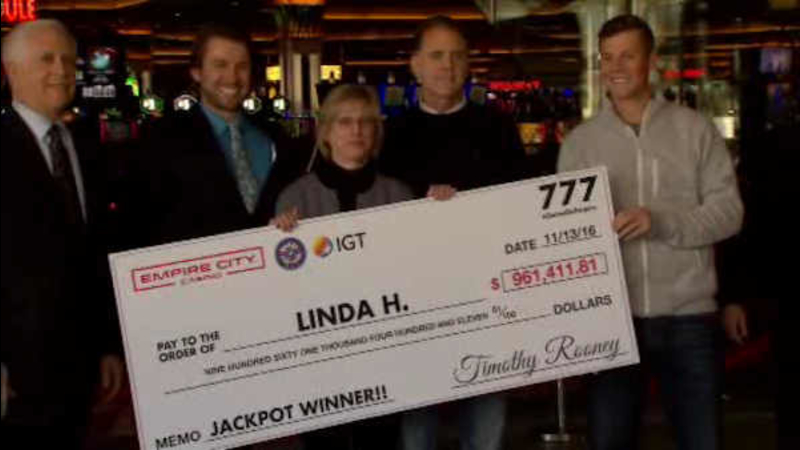 She won nearly $1 million at Empire City Casino, the second largest jackpot in the casino's history.

"I just happen to like Wheel of Fortune," said Linda H., who likes it a whole more now.

She and her husband Eddie live in Thornwood. They often gamble at Empire City Casino and popped in on Sunday.

One of the 110 Wheel of Fortune slots made her rich.

"I heard all the people around me cheering as well, so it was just like a blur, it was such a shock," said Linda.

Her husband had been in another part of the casino.

Linda's jackpot was the second highest won here. The largest was last October for almost $1.5 million at another Wheel of Fortune slot machine.

"As I said to Linda and her husband, don't do anything for at least a month," said Howard G., who won that record jackpot, and recommends not spending all that cash.

"Think of your long-term, short-term goals, make some decisions involving investment," he said. "You want to keep the money, or hopefully keep a significant portion of it."

Linda says she wants to help her two grown children with their expenses, but she'll keep working at her government job for another 3 years until she retires.

Certainly she has a lot to be thankful for this holiday, and even though this all came as a surprise, her husband of 38 year says she had a sense.