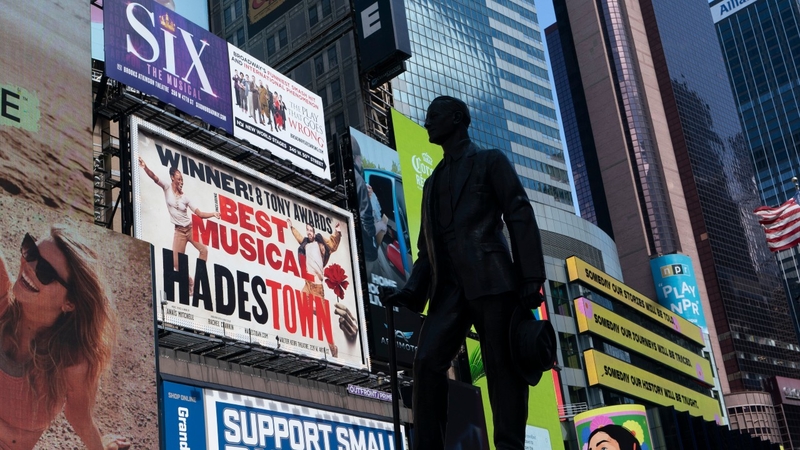 Some Broadway shows announce when they will return in the fall

NEW YORK CITY (WABC) -- Several Broadway productions have announced the dates they will welcome theater-goers this fall after city and state leaders green-lit a reopening of the Great White Way at full capacity by mid-September.

Governor Andrew Cuomo announced Wednesday that Broadway shows will be allowed to open again in New York City on September 14.

"Broadway is at the core of our New York identity, and a big part of our economy which employs countless performers and show creators, and beginning this September, the show will go on," he said. "Visitors from all around the world have come to New York to experience the arts and culture and see iconic performances on Broadway, and sadly, the pandemic put this unique New York experience on pause. Thankfully, as we continue to monitor the data and reopen our economy, we are now on track to allow full capacity performances on Broadway to resume in September, bringing back this beloved world-famous attraction."

Tickets were able to go on sale Thursday, with theaters being sold at 100% capacity.

According to Broadway.com, the following shows have announced their opening dates:


Shows will be allowed to decide their own entry requirements, like whether people must prove they've been vaccinated, and allowing them to sell every seat is designed to gauge interest before stages open, said Robert Mujica, Cuomo's budget director.

They can then determine, based on demand, how and when they reopen.

More shows are expected to circle return dates in the coming weeks.

Sandy Kenyon reports on the lights back on in The New Amsterdam Theater in New York City.

Actors' Equity Association, the national labor union representing more than 51,000 professional actors and stage managers in live theatre, released a statement in support of the decision.

"Today's news means we are one step closer to the safe reopening of not just Broadway, but jobs for thousands of workers in the New York area," Executive Director Mary McColl said. "We look forward to continuing our conversations with the Broadway League about a safe reopening and know that soon the time will come when members can go back to doing what they do best, creating world-class theatre."

The Broadway that reopens will look different.

In May, the big budget Disney musical "Frozen" decided not to reopen when Broadway theaters restart, marking the first time an established show had been felled by the coronavirus pandemic. Producers of "Mean Girls" also decided not to restart.

But there will be new shows, including Antoinette Chinonye Nwandu's "Pass Over" that is slated to reopen the August Wilson Theatre, the same venue "Mean Girls" has vacated. And a Shubert theater has been promised for playwright Keenan Scott II's play "Thoughts of a Colored Man."

The lifting of all capacity restrictions has long been considered by the industry as crucial to any reopening plan since Broadway economics demand full venue capacity. Some off-Broadway shows have already reopened with limited capacity.

For the first time ever, opening night will be screened simultaneously across all five boroughs in multiple open-air venues.

All city theaters abruptly closed on March 12, 2020, knocking out all shows, including 16 that were still scheduled to open.

Some scheduled spring 2020 shows - like a musical about Michael Jackson and a revival of Neil Simon's "Plaza Suite" starring Matthew Broderick and Sarah Jessica Parker - pushed their productions to 2021. But others abandoned their plans, including "Hangmen" and a revival of Edward Albee's "Who's Afraid of Virginia Woolf?"