Ginsburg to be memorialized with statue in hometown Brooklyn, Cuomo says

Cuomo said in a statement that he would appoint a commission that would be tasked with selecting an artist and location for the sculpture.

WATCH "From Brooklyn to the Bench: Remembering Ruth Bader Ginsburg" - Eyewitness News will honor her local legacy in a special half-hour on Monday at 5:30 p.m.

"Justice Ruth Bader Ginsburg selflessly pursued truth and justice in a world of division, giving voice to the voiceless and uplifting those who were pushed aside by forces of hate and indifference. As a lawyer, jurist and profess, she redefined gender equity and civil rights and ensured America lived up to her founding ideals - she was a monumental figure of equality, and we can all agree that she deserves a monument in her honor," Cuomo said.

Joan Ruth Bader was born in Brooklyn, in 1933, the second daughter in a middle-class family. Her older sister, who gave her the lifelong nickname "Kiki," died at age 6, so Ginsburg grew up in Flatbush as an only child.

Ginsburg later graduated at the top of her Columbia University law school class in 1959.

Meanwhile, New Jersey Gov. Phil Murphy ordered that the U.S. and New Jersey flags be flown at half-staff at all state buildings and facilities, in recognition of Ginsburg's passing.

"Justice Ginsburg dedicated her life and career not only to the premise of equal justice and equity under the law, but also to the most basic premise that, regardless of gender, or race, or religion, or orientation, or identity, or nationality and ethnic heritage, we all must commit to fight for the things that we care about," Murphy said. "We have been made a better nation, and a better people, through her reasoned approach and sharp-minded opinions."


Gov. Ned Lamont on Friday night ordered all U.S. and state flags in Connecticut to be flown at half-staff in honor of Ginsburg until sunset on the date of her burial, which has not been set.

"The nation mourns the unimaginable loss of Justice Ruth Bader Ginsburg - a fierce and fiery champion for fairness and equality for all," the Democratic governor said in a statement. "A giant inspiration and pioneer for women globally, Justice Ginsburg should not just be remembered for what she stood for but what she stood against."
EMBED More News Videos

New York City is honoring the legacy of Justice Ruth Bader Ginsburg in many different and creative ways. 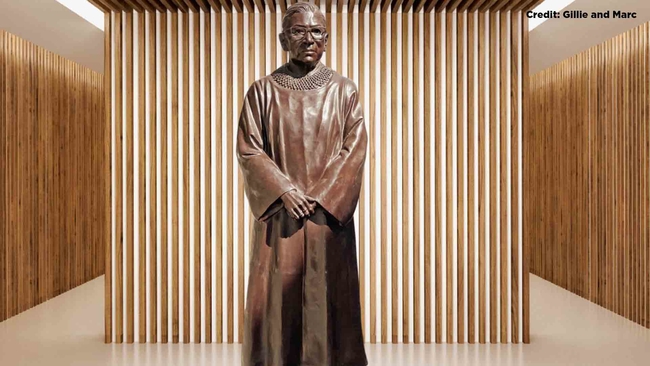