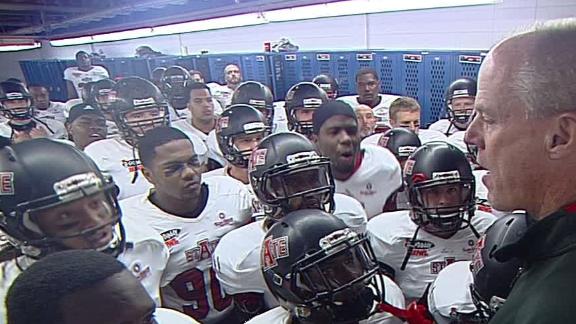 The school announced Thursday that it will auction off the right to coach in the game, which takes place next Friday night. The winner of the eBay auction, which has a starting bid price of $2,500, gets to call the plays for one of the two teams and will make pregame and halftime speeches.

As of midnight ET Thursday, the top bid for the auction was $9,500.

"We figure an Arkansas State fan would want to win this, but we didn't want to limit ourselves," said Blake Anderson, the school's fifth head football coach in five years.

In mid-December, Anderson took over for Bryan Harsin, who agreed to take the Boise State head-coaching job.

Anderson said when he coached at Southern Mississippi and University of North Carolina as part of Larry Fedora's staff, the school auctioned off the right to coach the spring game but did it in a closed environment in front of boosters only.

"We thought opening it up would help generate interest in our program," Anderson said.

Anderson said the winning bidder will get dressed up like the Arkansas State coaches, use the headset and have the freedom to do what he or she wants.

"If our coach wants to go (for it) on fourth-and-30, they can do that," Anderson said. "But we might have them explain themselves in a postgame press conference."