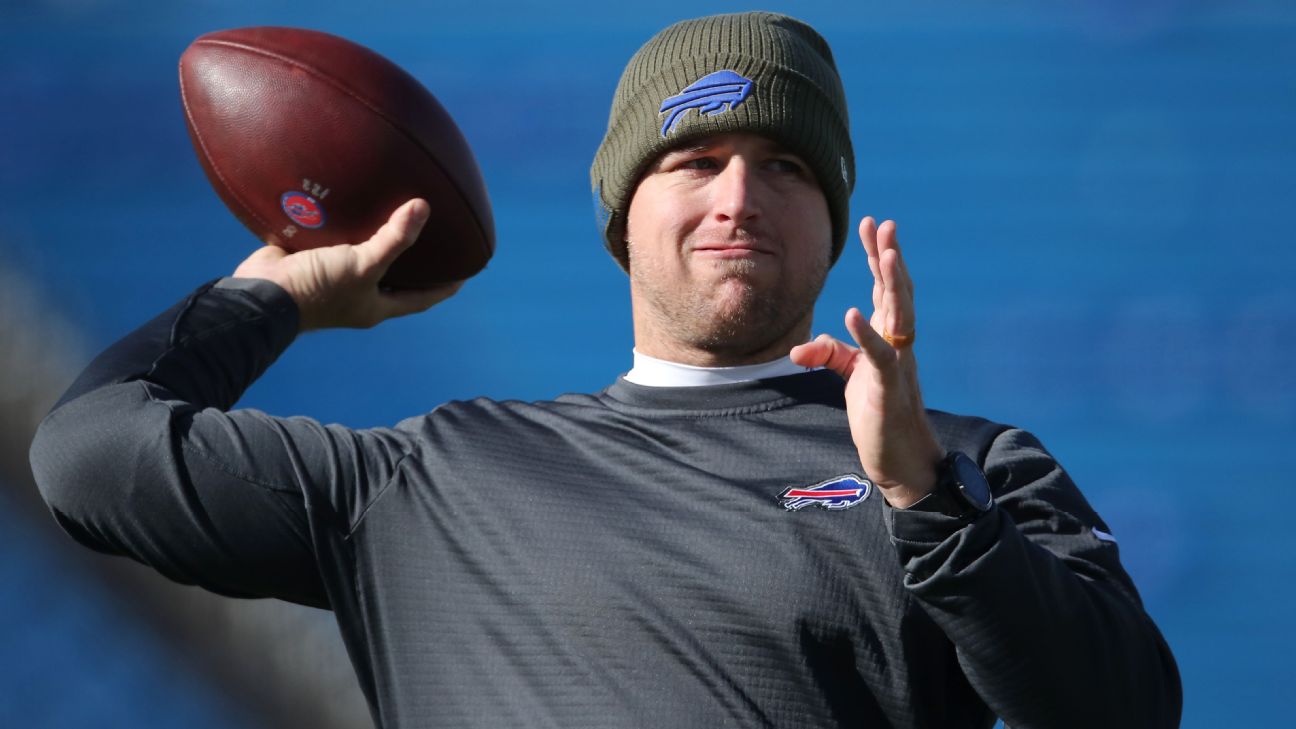 The Buffalo Bills have opted to start Matt Barkley over the interception-prone Nathan Peterman in Sunday's road game against the New York Jets.

Barkley was announced Saturday as the Bills' starter after the team ruled out rookie first-round quarterback Josh Allen, who will miss his fourth consecutive game because of an elbow injury. The Bills previously ruled out veteran Derek Anderson because of a concussion.

Barkley, whom the Bills signed Oct. 31, will become the team's fourth starting quarterback in the past five games. It will be the first time since the 1987 strike season that Buffalo (2-7) has started four quarterbacks in a season.

"He'll have a tough time because [the Jets] are a good defense and this is a fresh start," Bills running back LeSean McCoy said Friday of the possibility Barkley could start. "But I don't think it's nothing he can't handle. We'll support him. We'll be behind him. I'm sure he'll have a good game."

What had been a potential matchup of rookie first-rounders in Allen against the Jets' Sam Darnold will now be Barkley against Josh McCown, who is making his 2018 debut for New York (3-6). The Jets on Saturday promoted quarterback Davis Webb from the practice squad, an indication that Darnold, who is listed as doubtful with a right foot injury, will not be active for Sunday's game.

Barkley said Friday that he split snaps in practice this week with Allen and Peterman while Anderson remained sidelined.

"I know this game plan as well as a starter needs to know it," Barkley said.

Coach Sean McDermott said Monday that Peterman would start if neither Allen nor Anderson could play, but by Friday he was no longer committed to Peterman as the starter.

Peterman started Sunday's 41-9 loss to the Chicago Bears in place of Anderson, who was concussed in the closing minutes of an Oct. 29 loss to the New England Patriots. Anderson was starting his second consecutive game in place of Allen, who sprained his right elbow in an Oct. 14 loss at Houston.

Peterman completed 31 of 49 passes against Chicago for 188 yards, the fewest yards on as many completions by any NFL quarterback since at least 1950. He also threw three interceptions, including one returned for a touchdown.

Barkley, 28, was a fourth-round pick of the Philadelphia Eagles in 2013. His six career starts (eight TDs, four interceptions) all came for the Bears in the 2016 season. His last regular-season start came Jan. 1, 2017. Against the Vikings, he completed 10 of 14 passes for 125 yards and two interceptions.