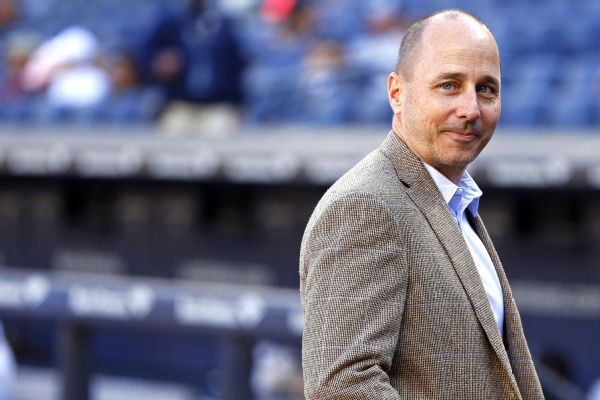 New York Yankees general manager Brian Cashman thinks his team can compete for another division title this season, but until that potentially happens, he only sees them one way.

"We're 'The Little Engine That Could,'" he said Wednesday as a guest on ESPN New York's "The Michael Kay Show."

The statement was accompanied on air by laughter.

Cashman compared his team to the persistent train engine of children's book lore after being asked how he viewed the Yankees in relation to their American League East rival, theRed Sox. Boston -- which won the division last season, forcing the Yankees to settle for a wild-card playoff berth -- signed free-agent power hitter J.D. Martinez earlier this week, a move that followed New York's own offseason trade for slugger Giancarlo Stanton.

The big-money additions of Martinez and Stanton have been viewed as a sign the rivalry between the old AL East powers has intensified.

"I look at them as the defending American League East champions. We have to find a way to close the gap on them," Cashman said of the Red Sox. "They just added another piece to improve on what they already had. So we already know who they are and what they are. And our job is to find a way to figure out to somehow get past them, and at the same time keep Toronto and Baltimore and Tampa behind us."

The comments echoed others Cashman made earlier in the day to reporters at the Yankees' spring training batting practice in Tampa, Florida.

"Until someone takes that away from them," Cashman said to reporters of the Red Sox's division title, "you've got to pay that homage."

Cashman wasn't the only one chatting about the teams' rivalry at spring training on Wednesday. Red Sox pitcher David Price chimed in about it following a series of questions about the Yankees during a media availability in Fort Myers, Florida. He was specifically asked about whether Martinez's addition could be viewed as a counterpunch to New York's trade for Stanton.

After downplaying any suggestions that the rivalry was ramping up again, and even after claiming that the Red Sox don't perceive the Yankees much differently than any of the other teams in the AL East, Price, at last, gave in.