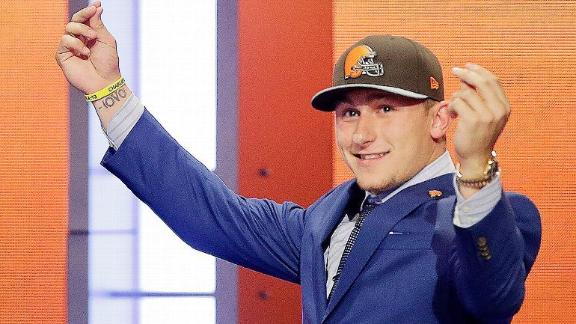 The Cleveland Browns have a bell that is rung every time a new season ticket is sold, and given the way things are going since the team selected Johnny Manziel with the 22nd pick in Thursday's first round of the NFL draft, the bell might need to be replaced before long.

Team president Alec Scheiner told ESPN.com that, in the time since Manziel was selected through 5 p.m. ET Friday, the team has sold more than 2,300 season tickets.

"We know right now that every one of our games is going to be sold out for next season," Scheiner said.

Despite knowing that picking Manziel would result in a frenzy, Scheiner stressed that the business ramifications of the pick weren't considered.

"The beauty of picking Johnny was that this was a football decision only," Scheiner said. "It had nothing to do with business in any way. The fact that he's an incredibly popular athlete wasn't factored in at all."

Even though fans lined up at the stadium store to buy No. 2 Manziel jerseys on Friday, first-year coach Mike Pettine told reporters that "Johnny Football" will have to earn a job with the team.

"I don't think you can hand jobs to people when they come in," Pettine said. "It's a situation where despite what's around him and what's following him -- and there will be pressure to play him -- we're in the business of evaluating the best quarterback for the Cleveland Browns to win football games, and that's who is going to play, whether that's Brian Hoyer or Johnny Manziel."

The Browns took to Twitter late Thursday, shortly after the Manziel pick:

A major thank you to the folks in our ticket office for working OT, phone lines are ringing off hook" #teamwork

- Cleveland Browns (@Browns) May 9, 2014Cleveland ticket broker Mark Klang of Amazing Tickets owns hundreds of Browns seats. He said he can't remember the last time the team had this type of buzz around it.

"I would equate getting Johnny to the night [the Cleveland Cavaliers] won the draft lottery to get LeBron [James] in 2003," Klang said. "We got more hits to our website in the hour after Johnny was drafted than we got in the three days after the schedule came out."

Klang said he raised the cheapest tickets he had for next season from $65 to $100. He says he typically loses "well into the five figures" on preseason tickets that never sell but thinks that because of Manziel he might be able to break even now.

Despite the hype of Manziel, Klang agrees with team management, saying long-term performance is what Browns fans ultimately want.

"We want to consistently go 12-4," Klang said. "If the Browns do that with Johnny Manziel, great, but it doesn't matter if it's Brian Hoyer, either."

Season-ticket prices range from $190 for the worst seats at FirstEnergy Stadium to $2,900 for club seats. Scheiner said the team decided to keep prices flat despite the increased demand.

The Browns, who haven't won more than five games in any of the past five seasons and haven't won a playoff game since 1994, finished 11th in the league in home attendance last year, averaging 71,242 tickets sold per game.

As part of a $120 million upgrade to its stadium, the team is reducing capacity this upcoming season by about 3,000 seats to 68,000, primarily to make way for larger video boards.

A higher percentage of televisions in Cleveland were tuned into the ESPN broadcast for Thursday's first-round coverage than in any other market. An astounding 20 percent of all tweets related to the NFL draft on Thursday night included Manziel, according to Poptip, an analytics tracking firm.

Financial Impact Of Browns Drafting Manziel
Darren Rovell discusses the economic impact of the Browns drafting QB Johnny Manziel and expects his jersey sales to be in the top three.

Manziel Lands With Browns At No. 22
Cleveland traded up to stop the Johnny Manziel free fall. Todd McShay looks at the busy first round for the Browns and what this means for their offense.