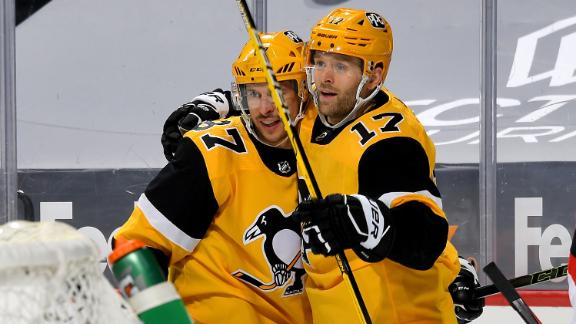 PITTSBURGH -- - The Pittsburgh Penguins weren't happy with the way they finished Tuesday night's game against the New Jersey Devils.


Crosby and Bryan Rust each scored their 19th goals of the season and the Penguins defeated the Devils 5-1 on Thursday night.

"(Crosby) was trying to make a huge statement to our team that we were going to respond the right way," Penguins coach Mike Sullivan said. "They dominated the first shift and scored a goal. I think that's a testament to his leadership."

Kasperi Kapanen returned to Pittsburgh's lineup after missing 13 games with a left foot injury and had a goal and an assist. Teddy Blueger scored a short-handed goal, and Cody Ceci also scored for the Penguins.

The teams also met Tuesday, when Pittsburgh became the first team in NHL history to win despite allowing six goals in the third period during a 7-6 victory. The Penguins, who have 12 wins and points in 14 of their last 17 games, didn't allow their big lead to slip away this time.

Tristan Jarry, who allowed those six goals on 11 third-period shots Tuesday, made 30 saves for the Penguins.

"We have a fair amount of players who know how to win," Sullivan said. "We have great veteran leadership. These guys take charge, the rest of the team follows suit."

Matt Tennyson scored for New Jersey, his first goal since Dec. 15, 2015, when he played for San Jose. Aaron Dell was pulled in the second period after allowing four goals on 15 shots. Scott Wedgewood stopped seven shots in the Devils' eighth straight loss.

The teams complete a three-game set Saturday in Pittsburgh.

"We're a team right now that needs big saves on big mistakes," Devils coach Lindy Ruff said. "We haven't gotten them and it's been hard on us. At the same time, we have to narrow the margin on mistakes we're making."

The Penguins scored three times on their first four shots of the second period, turning a one-goal lead into a 5-1 game.

Kapanen used his speed to work around defenseman Jonas Siegenthaler and beat Dell, as the Penguins scored consecutive goals in 25 seconds.

Blueger scored his third goal in as many games at 15:59 of the second, giving Pittsburgh the four-goal margin.

Crosby opened the scoring 41 seconds into the game, following an extended shift in the Devils zone. He picked off a pass near the top of the left circle and flipped a shot over Dell's shoulder. Crosby scored for the 13th time in the opening minute of a game, tied with Mark Messier for the most in NHL history.

"You always try to set the tone for how you want to play, and coming off last game, we weren't happy with our third period," Crosby said. "We wanted to have a good start and get in the right frame of mind. It was nice to get one early."

Kapanen played fourth-line right wing Thursday so the Penguins could manage his minutes and he could regain his timing and conditioning on the fly. Kapanen scored four goals and 11 points in 13 games before his injury, as he flourished earlier this season on the team's second line alongside Evgeni Malkin, who missed his 18th straight game with a lower-body injury.

"I only had one practice, but I felt really good," Kapanen said. "I think (Sullivan) did a good job of not playing me as much because it takes time to get into a rhythm. I was excited to be back out there."

Pavel Zacha and Jesper Bratt returned to the lineup for the Devils. Zacha and Bratt, who share the team lead with 25 points, missed five and four games respectively, both with lower-body injuries. Zacha started at left wing on the second line, while Bratt opened as third-line right wing, but the two took shifts with Nico Hischier in the second period.

Crosby, with 54 points in 46 games, is one point from his 16th season averaging at least one point per game.

Crosby, who can appear in a maximum 55 games, is looking to join Wayne Gretzky as the only players in NHL history to have a point-per-game season in each of their first 16 years in the league.

Crosby is also one goal from becoming the first player in team history to record 13 seasons of 20 or more goals. He would become the 36th player in NHL history to hit the mark and also pass Malkin and Penguins owner Mario Lemieux.

Crosby has eight goals and 25 points in 18 games without Malkin this season.

"I think he's quietly had a real strong year for us on both sides of the puck," Sullivan said. "His overall game is as good as it's ever been."