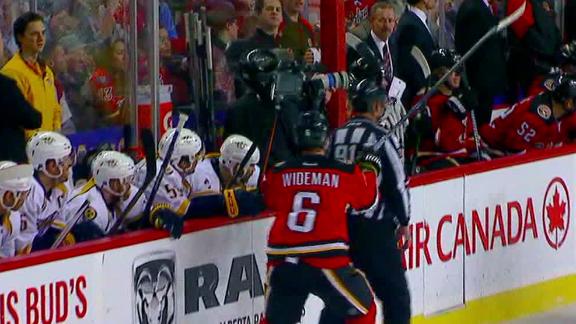 Commissioner Gary Bettman upheldCalgary FlamesdefensemanDennis Wideman's 20-game suspension in a ruling released Wednesday, but a reduction of the ban still could be in store.

Wideman, through the NHL Players' Association, will appeal the suspension to neutral arbitrator James Oldham. It is the first time under the new collective bargaining agreement that a player has gone this far with the appeal process.

"We are extremely disappointed but not surprised that Gary Bettman upheld the decision of his staff to suspend Dennis Wideman for 20 games," the NHLPA said in a statement."This decision completely ignores the effects of the concussion that Dennis sustained when he was driven into the boards eight seconds before colliding with the linesman. We will appeal to the Neutral Discipline Arbitrator in order to have this decision overturned."

The league originally suspended Wideman for 20 games for hitting linesman Don Henderson in a game against the Nashville Predators on Jan. 27. Wideman, who had just taken a hit from Nashville winger Miikka Salomaki, said the cross-check on Henderson was unintentional and the result of a concussion he suffered from the hit. He was not penalized.

In his ruling Wednesday, Bettman was firm in the league's decision to uphold its decision.

"I am left with the firm view that a significant suspension is appropriate," he said. "On-ice officials simply cannot be made the target of a player's frustration or anger. As noted above, the NHLPA observed that a reduced suspension is within the realm of possibility, though the Union did not suggest one. I do not see a basis for a lesser penalty, particularly given the severity of the conduct involved."

Bettman added that he was troubled by Wideman's "total failure to accept any responsibility for his actions." He noted that while Wideman made much at the appeal hearing about apologizing to Henderson, "The sincerity of those apologies rings somewhat hollow, given the text message he sent to a teammate on February 2 -- after the conclusion of the hearing before (vice president of hockey operations Colin Campbell) -- that 'the only problem and the only reason I'm here is cause the stupid refs and stupid media.'"

A league source told ESPN.com that the text was produced as part of the discovery process in the league's investigation.

Bettman said that, in light of Wideman's prior exemplary disciplinary record, he declined to increase the suspension.

Wideman's appeal hearing with Bettman on Feb. 10 lasted six and a half hours. A key part of Wideman's defense in that hearing, according to sources, was that he was concussed from the Salomaki hit and therefore not fully aware of his actions. The NHLPA had two concussion experts speak at the hearing.

The NHL, in its video explaining the 20-game suspension to Wideman, accepted the notion that Wideman was potentially concussed but still felt that didn't excuse his actions.

Wideman said after the game that he was distracted after the Salomaki hit and unintentionally collided with Henderson.

At the next stoppage, Wideman skated over to where the officials were gathered and apologized.

"I took a pretty good hit down in the corner and had some pretty good pain in my shoulder and neck," Wideman told reporters in Calgary that night. "I was just trying to get off the ice and kind of keeled over. At the last second, I looked up and saw [Henderson] and couldn't avoid it. I went up to Donnie and apologized to him on the ice.

"I didn't see him. I didn't know where to go and how to get out of the way. I've been around for a few years, and I think I've treated every official with the utmost respect, and I would never intentionally try to hit a linesman or a ref. It was completely unintentional, and I already apologized to him."

In October 2008, Mike Peca's 10-game suspension for grabbing the arm of referee Greg Kimberly while protesting an opposing goal was reduced to five games by Bettman.