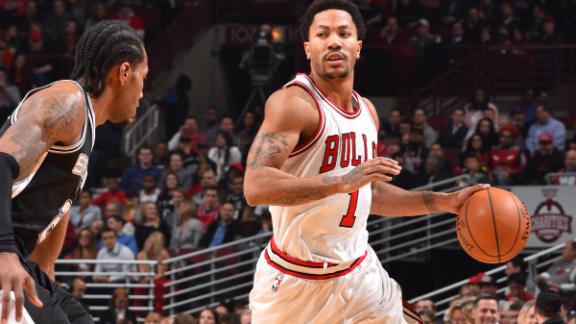 CHICAGO -- Amid criticism and speculation that Tom Thibodeau had lost a grip on the Chicago Bulls, Derrick Rosecame to a strong defense of his coach after Thursday night's 104-81 win over the San Antonio Spurs.

Rose said he believes it's up to him and his teammates -- not the coach -- to get the Bulls back on track. The team had entered Thursday's game having lost six of its last eight games.

Spurs coach Gregg Popovich came to a strong defense of Thibodeau, as well.

"He's not gonna lose any team," Popovich said before the game. "I think you guys just have to have stories. So somebody loses a few games, there's got to be a reason. I guess that's the one that was picked. Sometimes players listen to me.Timmy [Duncan]stopped listening to me along time ago. I don't even coach him. You guys think I'm kidding. He just plays. I talk to him once in a while, but sometimes some guys don't want to hear it.

"But as far as the team and being lost and that kind of thing, that's not what's happening here."

The Bulls held a team meeting Tuesday in which veteran Pau Gasol said that Thibodeau encouraged players to speak their minds.

The messages delivered in that meeting appeared to take hold Thursday as the Bulls delivered one of their most complete performances of the season against the defending NBA champions.

"The tone was obviously serious because we're in a serious mission, a serious situation," Gasol said. "So everybody just shared our thoughts. And try to be positive and encouraging to everyone. But it's time to get it together, it's time to react and do our best."

Popovich clearly believes that the Bulls are at their best with Thibodeau still at the helm.

"[The media] asked me that question before the game about, '[The Bulls] aren't listening to Thibs and Thibs has lost them and that kind of b-------,' " Popovich said. "You got your answer. As I told you before the game, that's baloney, nothing could be further from the truth. And hopefully whoever asked that question can figure that out instead of making stuff up like that.

"I thought the Bulls were physically and mentally committed to playing a great game. And I thought our play was humiliating and embarrassing because of the Bulls' tenacity and sense of purpose."