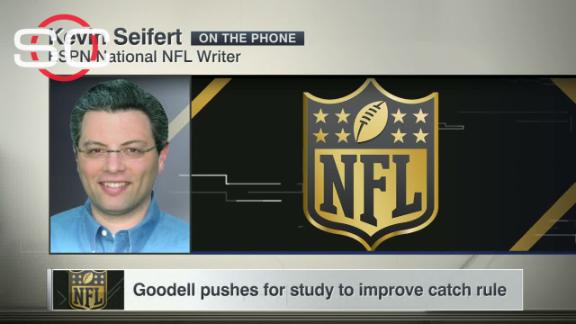 If commissioner Roger Goodell wants to clarify what constitutes a catch in the NFL, Cowboys wide receiver Dez Bryantis ready to help.

Bryant has been haunted by his overturned catch in a playoff loss to the Green Bay Packerslast January. Last week, Goodell acknowledged that the rules need to be looked at, and he is putting a committee together to study the issue.

"That's cool!" Bryant told USA Today on Tuesday. "They need to invite me. Tell them they need to call me, so I can have my input."

He's not the only one. Lions All-Pro Calvin Johnson is ready to offer his advice as well. He's had a number of "catches" taken away, including a notable would-have-been touchdown against the Bears in 2010.

"Yeah, go back and put that touchdown in the stat book; that'd be awesome," Johnson said.

"The Competition Committee has looked at that, but I'll go one step further with you: A couple weeks ago, I asked several football personnel, including former GMs, current GMs, current individuals, former players, former officials, to come together and try to see if we can study this and come up with some proposals for the Competition Committee to consider," Goodell said at the conclusion of Wednesday's owners meetings outside Dallas. "We want clarity to that. We want to find a better solution if it's out there."

Bryant's noncatch brought up all the issues that need to be addressed. It sure looked as though he made a catch and made some kind of football move before falling and having the ball come out when it contacted the ground. But that's not how the officials saw it, and just like that, the Cowboys' season was over.

"That's football," Bryant said, according to USA Today. "But I'll tell you this: I dwelled on that [expletive] for about a good two months. It was hard for me to watch [the rest of] the playoffs, just because ... I was like, 'Woo!'"

Johnson didn't have an airtight rule he'd like to see introduced; rather, he thinks the eyeball test can work.

"They say you got to take a couple of steps or whatever. I kind of agree with that but at the same time, there are some times when it's a gray line," he said. "It's almost common sense, a lot of those ones that they might miss."

Johnson's quarterback, Matthew Stafford, said he thinks Johnson should be part of the committee because he's been involved in key catch rulings a couple of times. Stafford said he has no idea what a catch is but added that "I know it when I see it."

He said he is wrong half the time, though, and can't fault the officials.

"Even when they go look at the review, it's still a human taking a look at it," Stafford said. "He's doing the best he can. Our refs do the best they can when they're out there."

Information from ESPN's Michael Rothstein was used in this report.