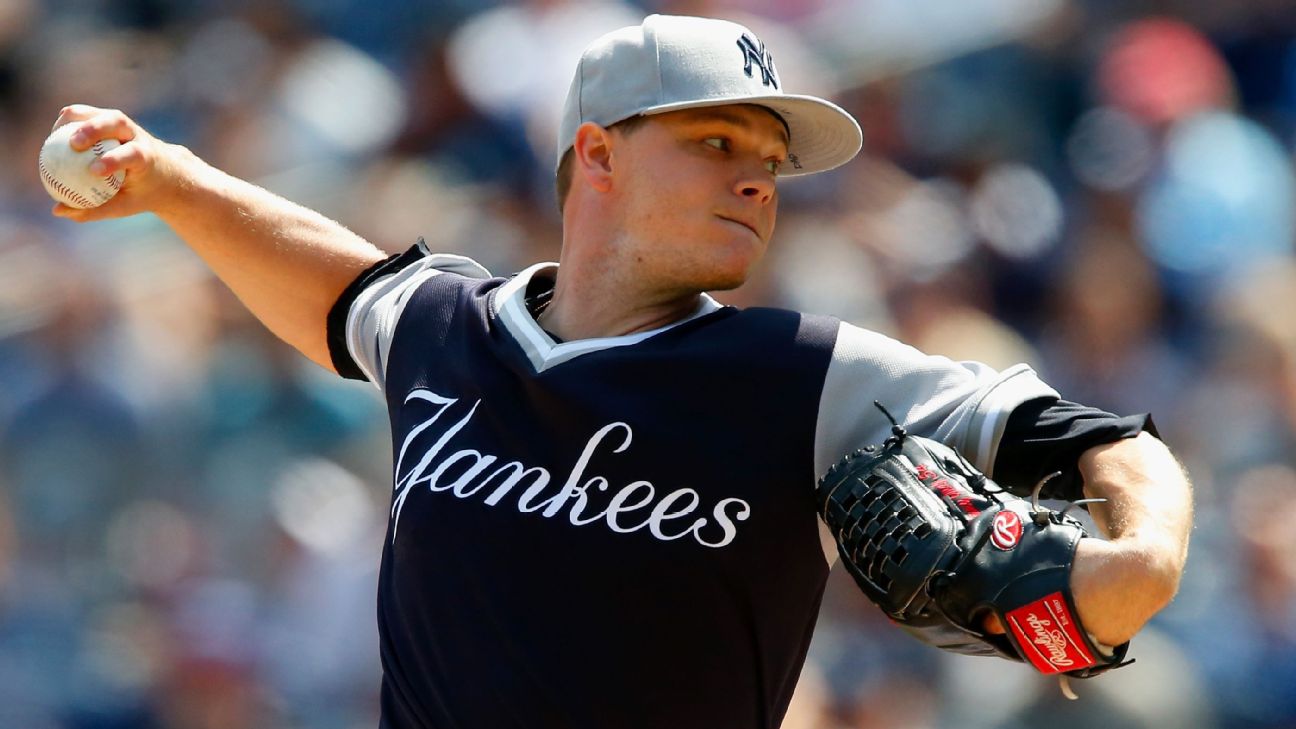 The Reds continued their whirlwind offseason, acquiring Sonny Gray from the New York Yankees for second-base prospect Shed Long and a compensation draft pick. As part of the deal, Gray negotiated a three-year, $30.5 million extension with a $12 million club option for 2023, on top of his $7.5 million salary for 2019. The Yankees then flipped Long to the Seattle Mariners for outfield prospect Josh Stowers, Seattle's second-round pick in 2018.

Gray is coming off a rough season with the Yankees in which he went 11-9 in 23 starts and seven relief appearances, but with a 4.90 ERA. The Reds are obviously banking that Gray's home/road splits reflected some sort of mental block about pitching in Yankee Stadium:

The differences are so stark, especially in Gray's strikeout-to-walk ratio, that maybe something unrelated to actual pitching ability did happen. The armchair psychologists are rarely right, but the "Sonny Gray couldn't handle New York" idea can't be completely dismissed. While he battled injuries in 2016 when he posted a 5.69 ERA, he was apparently healthy in 2018 and his radar readings were barely off his career norms with an average fastball velocity of 93.8 mph.

The concern about going from New York to Cincinnati, however, is that if Gray was freaked out by the short porch at Yankee Stadium, the Great American Ballpark isn't exactly going to be more soothing to the soul. Over the past three seasons, according to the "2019 Bill James Handbook," the Gap has the fourth-highest home run factor in the majors (although Yankee Stadium was highest).

Still, it's not unreasonable to expect a better season from Gray -- it's just a question if he can be a No. 2-quality starter or simply more of a back-end guy. To be fair, the Reds need back-end guys after allowing the most runs in the National League in 2018.

Coming off a 67-95 season -- their fifth consecutive losing season -- the Reds are determined to field a more competitive ballclub in 2019. Besides Gray, they've added five other players:

In the process, the Reds managed to dump Homer Bailey's contract, but also traded away two very good prospects in Long and shortstop Jeter Downs. While Long and Downs are intriguing players, neither is a guaranteed star and Downs in particular is a long way from the majors after playing in the Midwest League in 2018. Long, who hit .261/.353/.412 at Double-A Pensacola, is closer to the majors, but also likely blocked at the position in the future if Nick Senzel -- a top-10 overall prospect in the game -- takes over from Scooter Gennett at the keystone in 2020.

Still, the trades are interesting because they signal Cincinnati is basically all-in for a longshot attempt at contending in 2019. While the Reds signed Gray to the extension, Roark, Puig and Kemp are all free agents after 2019 and Wood is under control only through 2020. Considering the Reds finished 28.5 games out of first place, pushing this team to playoff status in a tough division feels unlikely.

Because of that, the moves have been met with a fair amount of criticism, particularly if Gray is viewed as declining goods rather than a potential rebound candidate. On the other hand, the critics can't have it both ways: You can't blast teams for not trying win and then blast them for trying to build a better team. As a small-market franchise, the Reds aren't in position to go out and sign Bryce Harper or Patrick Corbin, so arguably their only bet is to improve around the margins by bringing in some veteran contracts that other teams are willing to discard. Otherwise, it would be more of the same and preaching patience. (We also shouldn't completely dismiss the idea of the Reds signing a big free agent, given that they once gave Bailey a $105 million extension and Joey Votto a $217 million extension.)

I don't think the Reds are better than the Brewers, Cubs or Cardinals in the NL Central, but I also don't think they destroyed the future of the franchise here. They still have Senzel and Taylor Trammell and Jonathan India and Hunter Greene in their system. In fact, Dick Williams, president of baseball operations, said the Reds aren't done after this deal. That could mean adding a center fielder rather than forcing Puig or Scott Schebler to play there -- A.J. Pollock is a perfect fit -- or maybe even trading one of those top prospects for Corey Kluber or another top-tier starter.

The Reds still need a lot to go right to contend in 2019. They need Gray and Roark to pitch better than they did last season, and Luis Castillo to break out in the rotation, and Joey Votto to rediscover his power stroke, and Jesse Winker to play a full season with a .405 OBP, and Amir Garrett to emerge as a dominant lefty in the pen, and Puig not to get bored away from the L.A. limelight.