Durant: Media gets too much power 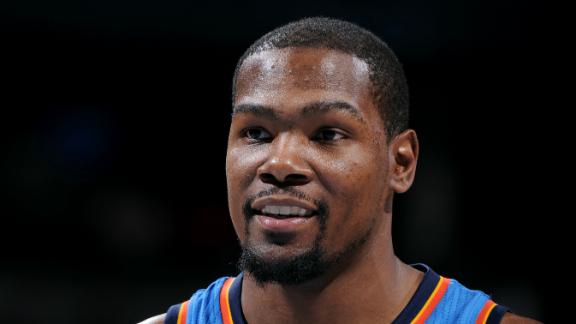 NEW YORK --Kevin Durant, the NBA's reigning Most Valuable Player, thinks the league's annual awards should include players in the voting process.

Durant said during his NBA All-Star media session with reporters that the players should be the ones with the power to decide who wins awards such as MVP, Defensive Player of the Year, Most Improved and Sixth Man, among others.

"I think (the) media gets too much power to vote on stuff like that. Quite frankly I don't think you really know a lot about as much we know about it," Durant said when asked if MVP winners should be allowed to vote on the MVP like former Heisman Trophy winners are allowed to do with the annual award for the best college football player. "So we play against these guys every single night, we battle against these guys, we know what they say on the court, we know how they handle their teammates, we know how they approach the game, and our votes should count.

"Our opinions should count. I don't think you guys know as much we do, and I don't see why you have more power than we do."

Durant won his first MVP for the 2013-14 season, totaling 1,232 points in voting, including 119 first-place votes. The award is decided by a panel of 124 voters consisting of sportswriters and broadcasters throughout the United States and Canada. There's also an NBA.com MVP fan vote that counts as one vote, making for a total of 125 total ballots overall.

"We really know these guys inside and out," Durant said of why players should vote for the awards. "There are a lot of guys that deserve Defensive Player of the Year or Sixth Man of the Year but you guys (decide sometimes because) they are not the sexier names. A lot of people will see the names of these players and don't look at the other guys that contribute to our game as well.

"You guys aren't in the scouting reports, you're not in the team meetings and the film sessions to really break down each player's games. I don't see why you have more power in voting than we do. We are out there on the court playing with them. We appreciate how you guys blow the game up and bring attention to the game but at the same time, to keep it pure, the players should have more say in that stuff."

Durant averaged a career-high 32.0 points, 7.4 rebounds and a career-high 5.5 assists last season. Winning his fourth scoring title, he beat out LeBron James (who was with Miami at the time), the Clippers' Blake Griffin, the Bulls' Joakim Noah and Rockets' James Harden for MVP.

This season, Durant is averaging 25.9 points, 6.6 rebounds and 4.0 assists in 26 games since returning from a fractured right foot.

"You guys vote on the MVP and I think MVP is a lot about narratives and what may happen during that time," Durant said when asked about the difference between a great season and a player having an MVP-type season. "There's a lot of guys that play extremely well for years and years and just starting to get MVP consideration. But I think that consistent play sometimes gets a little boring to people but if you look at a guy like James Harden, he's been doing it for three years, same things and people start to act like it's new.

"Steph Curry has been doing the same thing for three years and I guess the narrative (is) around their team but what he's been doing is new to everybody. Once you guys really watch games and realize what these guys have been doing consistently for years, it's nothing new. It's all the same. I guess the hype around it is a little different so ... of course everybody gets better but if you stay consistent in what you do it's not like they came out of nowhere."