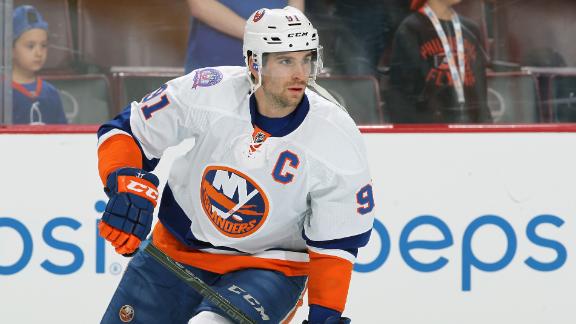 The New York Islanders squandered the chance to snag home-ice advantage in what was an emotional regular-season finale at Nassau Veterans Memorial Coliseum on Saturday night, so the club will travel to D.C. for Game 1 of their first-round series against the Washington Capitals, starting on Wednesday at Verizon Center. Captain John Tavares and the Islanders face a formidable opponent in the Caps and superstar Alex Ovechkin, who ran away with his third consecutive and fifth overall Maurice "Rocket" Richard Trophy, scoring a whopping 53 goals this season.


"They're a big, heavy team," Islanders forward Kyle Okposo said. "They play a hard game; they finish their checks. It's gonna be a physical series. We're going to have to use our legs, use what got us here, and that's our speed. It's going to be a hell of a series."


Fancy stats
This stat is far from fancy, but it is a concerning one for the Islanders. The team has surrendered a goal in the final 10 seconds of a period in three consecutive games heading into the postseason. What does that tell you? Mentally, the team needs to bear down and tighten its focus. One of those goals was a cringe-inducing gaffe on the part of goaltender Jaroslav Halak, who will be a critical component in whether the team advances to the next round.

Possession-wise, however, the Islanders seem to be in good shape. New York finished among the top teams in possession metrics, controlling 52.8 percent of shot attempts at even strength, compared to Washington, which finished with 51.4 percent. That said, we must note here that three of the top 10 finishers in this metric missed the playoffs completely (Los Angeles, Carolina, Dallas).


It's also worth noting that Washington boasts the league's best power play, with a 25.3 percent success rate, which is a vital asset considering the Islanders' woeful penalty-killing unit. The Isles ranked 26th in the league, with only Philadelphia, Edmonton, Arizona and Buffalo finishing beneath them.


Gut check
Watching New York defenseman Travis Hamonic limp into Nassau Coliseum on Saturday makes me skeptical that we will see much of him this series, which could be an utterly devastating blow for the Islanders. General manager Garth Snow gave the club a much-needed makeover on defense before the season, adding the likes of Nick Leddy and Johnny Boychuk to bolster the blue line, but the team will struggle without its heart-and-soul leader on defense if Hamonic misses any time.


I still think this Islanders team has some growing pains to sort out as well, though as Okposo pointed out following Saturday's finale, the team won't be hamstrung by nerves as they were for their first-round series against the Pittsburgh Penguins back in 2013.


"That experience helps us. I don't think we're going to have that shock in Game 1 like we did in that series. You know, we spotted them a game," Okposo said. "You can't do that during a series."

Ovechkin will be a force to be reckoned with coming off another stunning season in which he captured the league's goal-scoring title and tallied a franchise-record-setting 25 power-play goals. The Islanders know they will have their hands full with No. 8 and not just because of his offensive acumen.


"Not only does he score goals, but he's physical and he does a lot of things [other than] just put the puck in the net," Tavares said.


Tavares is no slouch, either, of course, as the 24-year-old phenom finished just one point behind Dallas' Jamie Benn for the league point-scoring title. Tavares set a career high with 38 goals and 86 points, including a two-point effort in Saturday's finale. In his first playoff series two seasons ago, Tavares chipped in with two goals and five points in six games against the Penguins.


Secret weapon
Though the spotlight will be shining on both Tavares and Ovechkin, this series could very well come down to goaltending with both Halak and Braden Holtby having career seasons. Neither of the two were afforded much rest during the regular-season slate, however, so it will be interesting to see how the wear and tear might impact the two both mentally and physically once the playoffs begin. Halak enters the postseason on a downturn. Though the 29-year-old Slovakia native posted a record-setting 38-win season, he has surrendered four goals or more in two of his past three starts. Holtby was also ridden heavily by coach Barry Trotz, leading the league with 73 games played, including a record-setting 25 straight starts heading into the playoffs. No other goaltender saw more shots, with Holtby facing 2,044 by season's end. The 25-year-old finished fifth in the league with a 2.22 goals-against average and seventh with a .923 save percentage.


The skinny
The Islanders are one of the most electric, captivating offensive teams to watch, and there is plenty of room for growth for a squad ripe with young talent, but they play too loose, and that will ultimately be their undoing. By comparison, this Capitals group is a hard-nosed bunch that plays a more complete game.


"The Capitals are going to take a piece out of them," one Eastern Conference executive said of the Caps' physical brand of hockey.


Tavares and Ovechkin will be a riveting showdown between two of the game's most dynamic stars, but assuming the series comes down to defense and goaltending, the Caps have the definite edge.


Expect this to be a thrilling ride. Capitals in 6.

Biggest challenge for Tavares
ESPN.com NHL writer Katie Strang talks with New York Islanders center John Tavares on what it will be like going up against Washington Capitals wing Alex Ovechkin.