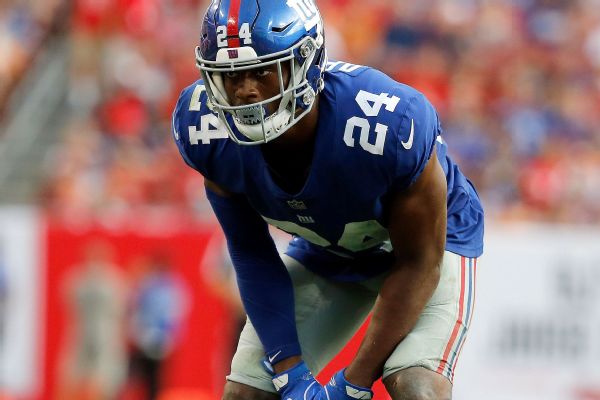 EAST RUTHERFORD, N.J. -- The New York Giants are "disappointed" in cornerback Eli Apple, and he could face discipline for tweeting during Sunday's loss to the Dallas Cowboys at MetLife Stadium.

Apple, the 10th overall pick last year, was inactive for the fourth straight game. He responded to a tweet asking why he wasn't playing with "I'm too healthy" and an emoji of a man with his hands in the air. He also retweeted a tweet that praised Cowboys running back Rod Smith for icing the Giants with an 81-yard touchdown reception in the fourth quarter.

Apple and Smith both went to Ohio State.

"I had a conversation with Eli about that. I was disappointed," interim coach Steve Spagnuolo said. "I told him I was disappointed. We'll decide exactly what we do with it. He apologized. We move on from that."

Apple declined to talk after the game, saying he wasn't allowed to speak.

Spagnuolo said he knew only that Apple had tweeted during the game, not the contents of the tweet. Veteran cornerback Dominique Rodgers-Cromartie wasn't aware of the situation until he was asked about it by the media on Monday.

"I didn't know about it. He tweeted during the game. What did he say?" Rodgers-Cromartie asked. "Pshhh. That is a tough one there. I don't know. They probably have that kind of connection. But to do it during the game, that is probably bad timing."

It has been a tumultuous season for Apple, the second-year cornerback who started the Giants' first three games this season. He was originally benched for reportedly having a shouting match with his position coach. Apple also had to miss a couple of days of practice as he dealt with a personal issue related to the health of a family member.

The hits seemed to keep coming. Apple missed two practices last week as he was dealing with hip and back injuries.

Spagnuolo said Apple didn't get enough reps in practice throughout the week to play against the Cowboys. Spagnuolo said the plan is for him to return to the field this week when the Giants host the Philadelphia Eagles.

"Look, we need to get you going. Everybody wants you here helping us out," Spagnuolo said he told the young cornerback, whom the Giants had high hopes for entering this season.

"But this wasn't the week to do it. He didn't get enough reps during the week. But he did get some on Friday. I just didn't think it was enough to have him ready to do the things we were going to do with the defensive game plan.

"He understood that. The goal there, after we shook hands and hugged, was to get him up and running next week."

Apple, 22, has been the subject of much discussion this season. One source told ESPN that he is disliked within the organization. Another source described him as "being in the doghouse." That makes sense, given that he has been shelved the past four weeks and has started only seven games this season.

The Giants have been in no rush for Apple to return, despite starting Ross Cockrell and Brandon Dixon at cornerback, with Rodgers-Cromartie playing the slot.

"He's cool with me because I understand. I used to be that guy. You feel me?" Rodgers-Cromartie said. "When you're going through stuff, sometimes you don't know how to act out, so you act a certain way. I get that. It takes someone to hone in and make you feel loved.

"But the other point is it's a profession. You've got guys in here that is professional and strictly about their business. So if it seems like a guy isn't doing what he's asked to do, it rubs them the wrong way. I just understand it."

Rodgers-Cromartie said he tries to stay in Apple's ear. He knows from experience what the young cornerback is dealing with this season. Rodgers-Cromartie had his own struggles early in his career and is on his fourth NFL team despite being a Pro Bowl corner.

He said Apple doesn't want to leave the Giants but has enough talent and tape to get a second chance if something goes awry.

"I don't want to see him go down that path. I try to stay on him," Rodgers-Cromartie said.

Is he headed in the right direction?

"It's hard to tell," Rodgers-Cromartie said. "I can say he comes in here in the right mindset and comes in and puts his stuff on and goes out there and practices. He does what is asked of him. I think, for the most part, he gets it."
Report a correction or typo
Related topics:
sportsespnnfltweetdisciplinenew york giantseli apple
Copyright © 2022 ESPN Internet Ventures. All rights reserved.
TOP STORIES
9 people shot, including 1 teen, in Newark drive-by shooting
2 boys, ages 11 and 13, stabbed in brawl outside NYCHA complex
Police arrest man wanted in Queens triple murder mystery
Woman, 86, recognized as longest-serving flight attendant
Woman killed while pushing stroller believed to be targeted: sources
14-year-old tiger dies after contracting COVID-19 at zoo
FCC asks Apple, Google to block TikTok from app stores
Show More
Plane crashes into CT river; 2 people, dog rescued
AccuWeather: Very hot and humid
Cruise ship hits iceberg in Alaska, returns to Seattle for repairs
Bus driver retires after 4-decades with Liberty Lines Transit
Vintage Burger King found behind wall inside Delaware mall
More TOP STORIES News