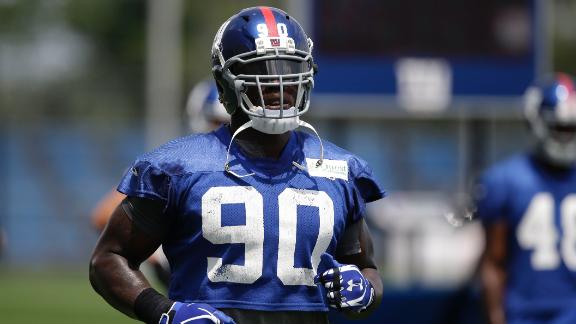 Jason Pierre-Paulunderwent a physical and provided the New York Giants with all of the medical records related to injuries he suffered in a July 4 fireworks accident that resulted in his right index finger being amputated, a league source said.

In addition, the Giants were sent a tape of Pierre-Paul doing conditioning work and defensive line drills, as well as lifting weights under the supervision of John Blake, a formerOklahomahead coach and a defensive assistant for the Dallas Cowboys under Barry Switzer.

The source said Pierre-Paul's first visit to the team Monday was to provide the Giants a chance to evaluate Pierre-Paul so they can make an informed decision about how to proceed.

"He could play this week, but he probably wont," the source said. "If it was up to him, he would wrap his hand in a cast and play."

The Giants open the season Sunday at Dallas.

The Giants used their franchise tag on Pierre-Paul, who has yet to sign the one-year, $14.8 million tender. There could still be a dispute over the Giants' ruling on his physical and how long they believe it will be before he can play, in addition to the hand injuries. Pierre-Paul did not participate in the Giants' offseason program or training camp.

The Giants could attempt to place him on the non-football injury list if they believe it will be at least six weeks before he's ready to play. They will not be obligated to pay him his salary if he's placed on that list. Pierre-Paul hasn't signed the franchise tender so he can maintain some control over his return to the field.