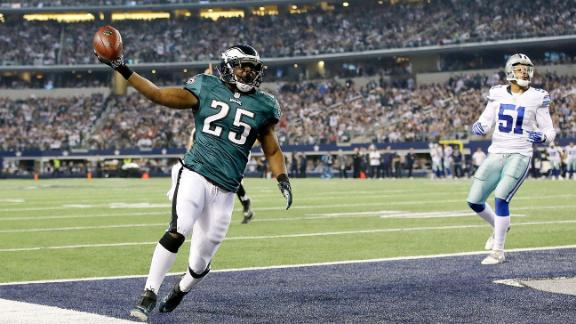 PHILADELPHIA -- LeSean McCoy did in fact leave a 20-cent tip for a waiter at a Philadelphia restaurant on Monday. The Eagles running back said it was a deliberate statement on the quality of service.

McCoy and some friends had lunch Monday afternoon at PYT, a burger place in the Northern Liberties section of the city. The check came to $61.56. McCoy, who has a base salary of $7.6 million in 2014, added a 20-cent gratuity and signed the tab with a flourish.

"A 20-cent tip is kind of a statement," McCoy said. "You can't disrespect somebody and expect them to tip you. I don't care who the person is. That's why I left my card, so they could see my name."


Through social media, a small controversy erupted. Up said McCoy and his party were rude to the server. McCoy said the server was rude. Actor Charlie Sheen, seeing the story via Twitter, offered to give the waiter $1,000.

- Charlie Sheen (@charliesheen) September 10, 2014"I'm happy he's finally doing something positive," McCoy said. "That's cool. Any restaurant I go around Philadelphia, I tip very well. You check on that restaurant. Everybody was talking bad about that place [on Facebook and Twitter]. But good food, good food."