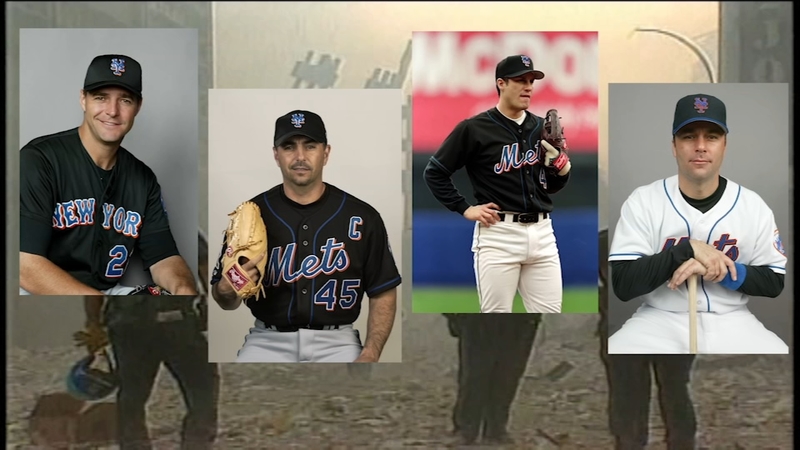 NEW YORK (WABC) -- Every year, the Mets honor those killed in the September 11 attacks with a visit to a firehouse. Despite the pandemic, the team continued that tradition, but in a unique way.

"We went to the firehouse - I believe it was Firehouse 10, and we were standing on the roof, and showing where things used to be. It really sunk in - it was a punch in the gut," said Mets Hall of Fame pitcher John Franco.

"I thought, should be here? Is it a good idea, are we in the way?' said retired Mets pitcher Al Leiter, "After being there the time that we were there, and realizing as sad as it was, people were happy we were there at the time."

Every year, former Mets players reflect on their time spent at Ground Zero right after the September 11 attacks.

"It did take our minds off of what had occurred days before and relieved some of the pressure. I know myself, I was the only survivor from my company, Rescue 5 that day," said retired FDNY firefighter William Spade.

Retired FDNY firefighter Carl Graziano said he knew the Mets had their back.

The players worked, too, collecting and delivering supplies to those on the front lines of the rescue and recovery effort.

"Every guy ran out of practice to unload a tractor, whether it was water, any type of equipment to get down to ground zero for the rescue workers to have," said Franco.

"When you look back at your career and think of the times that affect you the most, that period of time definitely affected me the most," said retired Mets 3rd baseman Robin Ventura.

Franco says they all feel a special closeness.

"We don't see each other for ten, twelve years. We're all wearing glasses now, but we all have that closeness. We'll always have that bond of a team that not only did a great job on the field, but we did an extraordinary job off the field," he said.