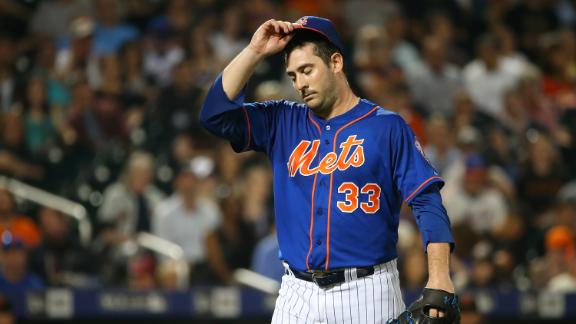 NEW YORK -- Wednesday night at Citi Field could have been sponsored by Titleist, because it was placed squarely on a tee for the ace of the New York Mets. Matt Harvey is supposed to live for these circumstances. He is supposed to want the ball, fire it with bad intentions, and elevate his team right after it has been reduced to something smaller than a sunflower seed.

Tuesday night, the Mets could not manage a single hit against a 27-year-old rookie named Chris Heston, the anti-Harvey, a 12th-round draft pick and relative non-prospect who did six years of hard time in the minors. The San Francisco Giants find players all over the place and develop them just like the New England Patriots and San Antonio Spurs do, so maybe it shouldn't have surprised anyone that Heston delivered the sport's first no-hitter of 2015.

Just as it wouldn't have surprised anyone had the surgically-repaired Harvey, a first-round pick and everybody's all-American, answered that shutdown Wednesday night by striking out 15 Giants and leaving witnesses to wonder just how they'd won three World Series titles over five years in the first place.

But as it turned out, Harvey would deliver something entirely different for those who showed up to watch him do what an ace is charged to do after his team is embarrassed at home. Hours after the Washington Nationals won in extra innings in the Bronx, forcing Harvey to protect the Mets' position in first place, something unfunny happened on the way to a stabilizing victory over the defending champs.

The franchise player let down the franchise. Harvey threw a steady procession of flat, indifferent fastballs, blew a 4-2 lead by surrendering two homers and five runs in the sixth inning, and trudged toward the dugout to a round of muffled boos from fans who didn't have their hearts in it, fans who would've really let him have it if he wasn't, you know, Matt Harvey.

"It was just a terrible performance," he said after allowing seven runs and nine hits over six innings in an 8-5 defeat. "The last couple of starts have been extremely bad. Just not getting it done. Just not helping the team in any way. Something needs to change."

Maybe change isn't possible right now for a man who missed so much time due to Tommy John surgery. Harvey said he wouldn't use his surgery "as an excuse," and that his body and right arm feel great, but the lack of late life -- or lack of late anything -- on his high-90s fastball tells a more convincing tale than his words.

A lot better. When his 100-pitch night was mercifully complete, Harvey's numbers reported he'd given up 20 earned runs and eight homers in his past 25 innings. That dead arm he had in Pittsburgh had become a mummified arm in Queens. The man who had allowed seven home runs over 178 innings in 2013 has already allowed a dozen over 79 innings in 2015.

No matter how long it takes David Wright and Daniel Murphy to rejoin Travis d'Arnaud in the lineup, the Mets have no chance to be more interesting than the Yankees, Giants, and Jets in September if this is the best their best pitcher can do.

It wasn't supposed to go down like this, not after Harvey won his first five starts and muted all concerns about his recovery from Tommy John. In his Citi Field opener in April -- after beating the loaded Nationals at their place -- Harvey was an electric presence who hit 99 mph on the gun, struck out five of seven Phillies in the first two innings, intentionally drilled Chase Utley, and then stared him down for good measure.

Harvey was sending a message for all to see: The bad old days were behind the Mets, and the once proud Phillies would now pay the price. New Yorkers were so caught up in the hope of that message, they barely noticed Wright had gone down with a bum hamstring, maybe compromising this season for good.

But the dominant Harvey and the Mets, who would win 13 of their first 16 games, have been replaced by a much less inspiring star and supporting cast. San Francisco toyed with them in their own building in the first game of this series, and then blitzed them hard again in the opening minutes of Game 2.

Nori Aoki needed only two pitches to end any New Yorker's fantasy of a Harvey payback no-hitter -- ripping a single to right -- before Joe Panik launched an 0-2 four-seamer over the wall for a 2-0 lead, marking the first time Harvey had allowed a homer on an 0-2 count. To their credit, the desperate and depleted Mets offense responded with two runs in the bottom of the inning (despite some baserunning from Curtis Granderson you shouldn't see in Williamsport, never mind the big leagues), and with two more in the middle of the game to set up Harvey for the smooth ride home.

Normally it's a pitcher's job to give his team a chance to win. This time, the Mets were the ones who gave Harvey a chance to win. And instead of honoring their honest work at the plate, Harvey turned the sixth inning into the kind of video Giants officials might use to recruit free agents after they're done trying to win another ring.

Buster Posey smoked a 99 mph 0-2 pitch for a two-run double. Brandon Belt hit a two-run shot over the Budweiser sign in left-center. Brandon Crawford doubled before being thrown out at third, and then Harvey responded to that gift by serving up another home run to Justin Maxwell.

Mets manager Terry Collins would talk later about all the fastballs his guy left over the heart of the plate, wasting all those two-strike counts. The manager couldn't believe that a pitcher who threw so hard could leave the ballpark with a mere two strikeouts to his name. "It's not just about having great stuff," Collins said. "It's making great pitches."

Harvey can't even make good pitches now, and odds are, the surgery has caught up to him. Speaking in front of his locker, a locker best identified by a sticker of the Batman logo and his jersey number, 33, Harvey looked and sounded like a really bummed out dude. As it turns out, the Mets' Dark Knight of Gotham is no superhero.

The ace with the most celebrated 18-14 career record ever is proving to be all too human at a time when his team needs him to be something more powerful than that.