Mets have plenty of holes, but few answers 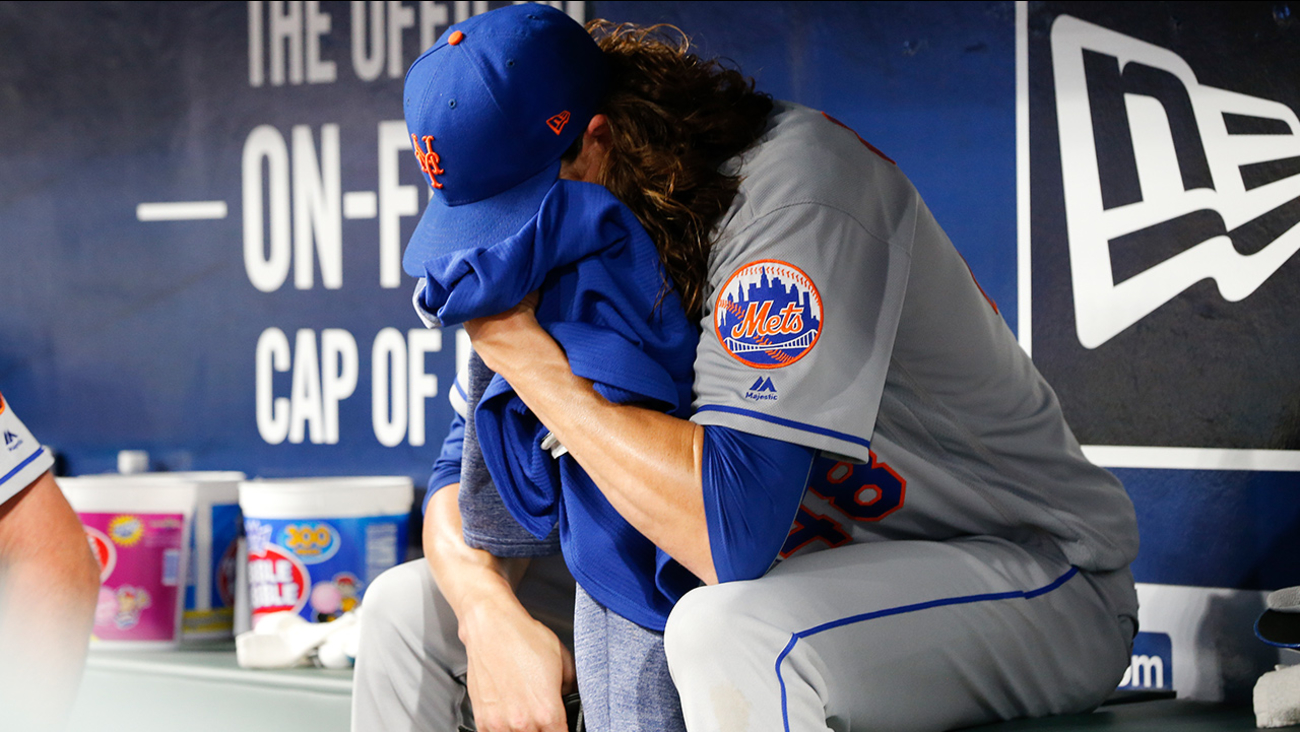 New York Mets starting pitcher Jacob deGrom (48) sits on the bench after pitching the fifth inning of a baseball game against the Atlanta Braves Wednesday, May 3, 2017, in Atlanta (John Bazemore)

NEW YORK CITY (WABC) -- Good news finally for Mets fans. The 2017 season is almost over. What a disaster it turned into. A strong playoff contender turned into an injury riddled team that never reached anywhere near its potential.

So let's look ahead to next season, and there are holes everywhere that Sandy Alderson must deal with. The once rich starting pitching staff has crumbled. The future of Matt Harvey has been clouded by injury. His 13.00 ERA in his last 4 starts has given major concern to whether he will be productive in the future.

The jury is also out on Steven Matz and Zack Wheeler after injury-filled seasons once again. Once dominant closer Jeurys Familia has also looked like a shell of himself since returning from injury.

The everyday lineup is filled with holes. Dom Smith has not shown enough to guarantee a full time job at first base. There are openings at second base and third base, with the only sure thing at shortstop.

Hopefully, the Mets will have a healthy Yoenis Cespedes to anchor the outfield, but a shoulder injury to Michael Conforto has his status in limbo.

So to sum it up, the Mets need help just about everywhere. They do have money to spend, but with so many holes they need to spend it wisely.
Report a correction or typo
Related topics:
sportsnew york mets
Copyright © 2021 WABC-TV. All Rights Reserved.
TOP STORIES
AccuWeather Alert: Tornado watch ahead of storms | LIVE
Tornado watch vs warning: What's the difference?
Vessel at Hudson Yards closed again after another suicide
Biden set to announce vaccine push for all federal employees
Video: 14 hurt when bus slams into subway support pole
Woman hospitalized after capturing marriage proposal
'Most Wanted' man who murdered fiancée and her dog gets 30 years
Show More
NYC mulls mask guidance as some restaurants mandate vaccines
Celebrity NYC sommelier charged with arson
Wegmans moving into old K-Mart location in Astor Place
Former NYC Councilman sentenced to 3 months in prison for tax fraud
Billionaire founder of electric truck manufacturer charged with fraud
More TOP STORIES News