Mets' Michael Conforto to have shoulder surgery, out months 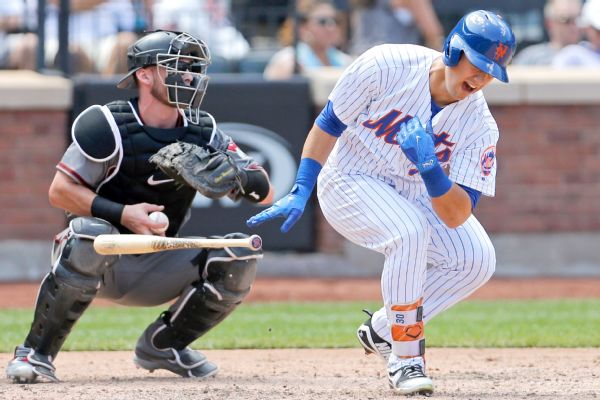 New York Mets outfielder Michael Conforto will undergo shoulder surgery and will likely be in rehabilitation for months, ending his breakout season on a down note.

Conforto was injured Aug. 24 during a swing, and an MRI on his left shoulder revealed a tear in the posterior capsule. The team said that a definite timetable for his recovery won't be known until after the surgery.

The All-Star slugger had collapsed in pain after swinging at a pitch in the fifth inning of a 3-2 loss to the Arizona Diamondbacks.

Initial X-rays on the shoulder revealed a dislocation, but follow-up tests showed the tear. Conforto was placed on the disabled list.

With two outs and runners on first and second, Conforto swung through a 95-mph fastball by Robbie Ray. He collapsed and grabbed his shoulder. Conforto stayed down for about 40 seconds before being helped to his feet by Terry Collins, trainer Ray Ramirez and another member of the coaching staff.

To help fill the gap in the outfield, the Mets signed veteran Nori Aoki. He was released by the Toronto Blue Jays Aug. 29 after only 12 games with the team. At the trade deadline, he had been dealt to Toronto in the deal that landed Francisco Liriano with the Houston Astros.

Aoki has a .285 average with 128 doubles, 33 homers and 211 RBI during a big league career that has included stops in for Milwaukee, Kansas City, San Francisco and Seattle.