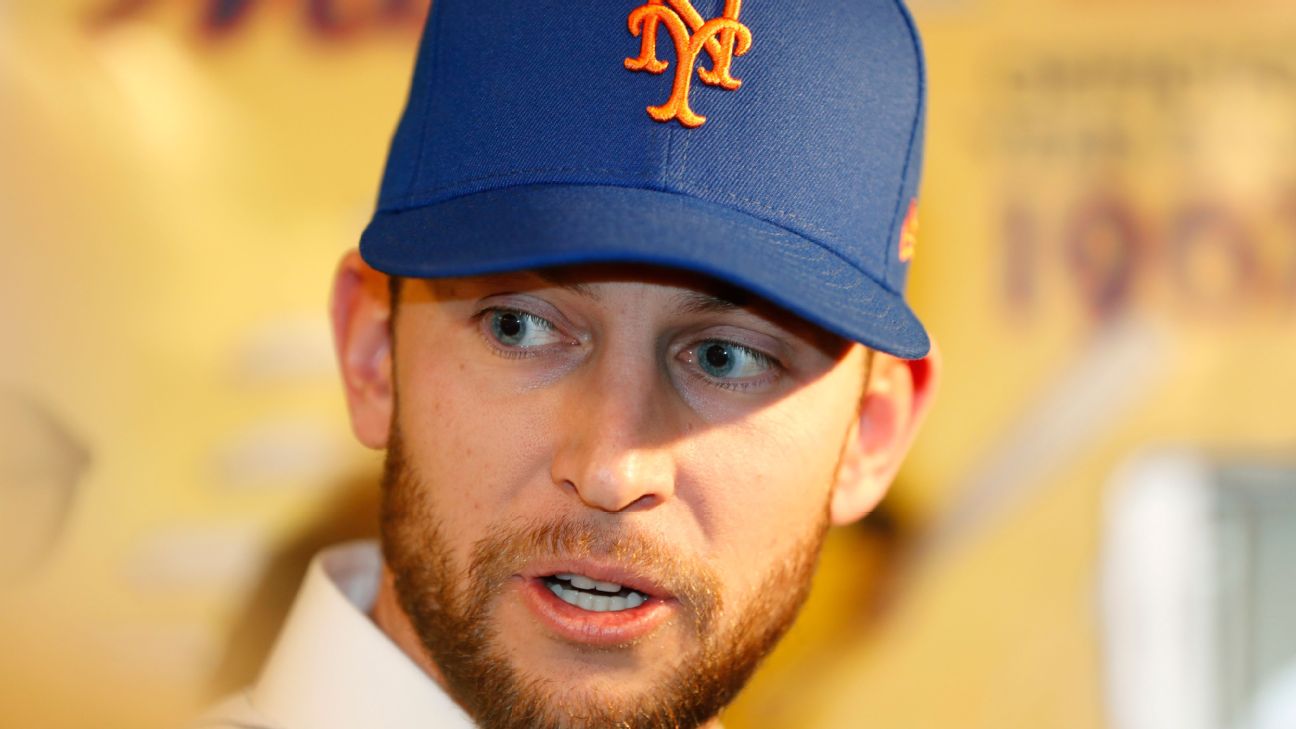 PORT ST. LUCIE, Fla. -- An MRI of Jed Lowrie's left knee was negative, and the New York Mets said the infielder, while behind schedule, is likely to be ready for Opening Day.

"It's nothing serious," manager Mickey Callaway said Friday. "We're going to progress slowly so that when he comes back to play he's 100 percent."

The 34-year-old Lowrie provides valuable depth because he can play second base, shortstop and third base. An 11-year veteran, he played 153 or more games in each of the past two seasons for Oakland.

"That's why we brought in depth. If something unfortunate happens, we're covered," Callaway said. "The guys we have in their 30s have played a lot of games in their 30s.

"Cano is going to play in a lot of games," Callaway added. "He knows how to take care of himself. I'm not that concerned about it because of who we have in their 30s out there and the way they prepare."

"Brodie has said if you have five infielders and four infield positions, that comes out to about 130 games apiece," Callaway said.

Ahead of Saturday's spring training opener against Atlanta, the Mets held a simulated game featuring players batting off a pitching machine set at 50 feet and throwing 90 mph.

Jeff McNeil hit one of only two homers in the brief contest, a drive that landed at the top of the berm in right field. Non-roster outfielder Rymer Liriano had the other, in the game's second at-bat.

"The pitching machine was nice. It's a nice drill because it speeds things up, and we get a lot of things done," McNeil said.

Top prospect Pete Alonso doubled down the left-field line. Van Wagenen has said he will not start Alonso in the minors just to extend his free-agency eligibility by a year beyond the 2024-25 offseason.

Offseason acquisition Walker Lockett will start Saturday. The 24-year-old right-hander is a candidate to be the Mets' sixth starter when injuries hit, along with left-hander Hector Santiago, also set to pitch against the Braves.

"It's awesome. It's exciting," Lockett said. "New organization, and they're giving me an opportunity. There's nothing more that's going to get you fired up that to play with guys like that behind you."

Cleon Jones, Art Shamsky and Ed Kranepool of the 1969 champion Mets were at camp. "That year, with Joe Namath running off the field and pointing his finger after winning the Super Bowl, Cleon catching that ball in the last out of the World Series and Willis Reed running on the court for Game 7 against the Lakers for the Knicks, those are icon moments in the history of sports in New York," Shamsky said. ... INF T.J. Rivera has taken a couple of days off from throwing. "I was full-go a couple of days ago, but I had a little soreness from the throwing just because I've lengthened it out a little bit," said Rivera, who is rehabbing from Tommy John surgery he underwent in 2017.
Report a correction or typo
Related topics:
sportsespnmlbmickey callawaynew york metsjed lowrie
Copyright © 2022 ESPN Internet Ventures. All rights reserved.
TOP STORIES
AccuWeather LIVE: Snow turns to rain, Coastal Warnings posted
How much snow fell across the Tri-State
Snow, heavy rain, wind hit Tri-State amid warnings and advisories
Man who posed as food delivery worker wanted in deadly shooting
NYC remembers Dr. Martin Luther King, Jr. | LIVE
Betty White Challenge has fans donating to animal charities
Heat sensor bill aims to hold landlords accountable
Show More
Elderly man using cane punched in head in Brooklyn
COVID Update: US averaging 782,000 new cases a day
Man who recovered from COVID twice celebrates 105th birthday
Mass funeral held for Bronx fire victims
Woman killed after man pushes her in front of subway train
More TOP STORIES News