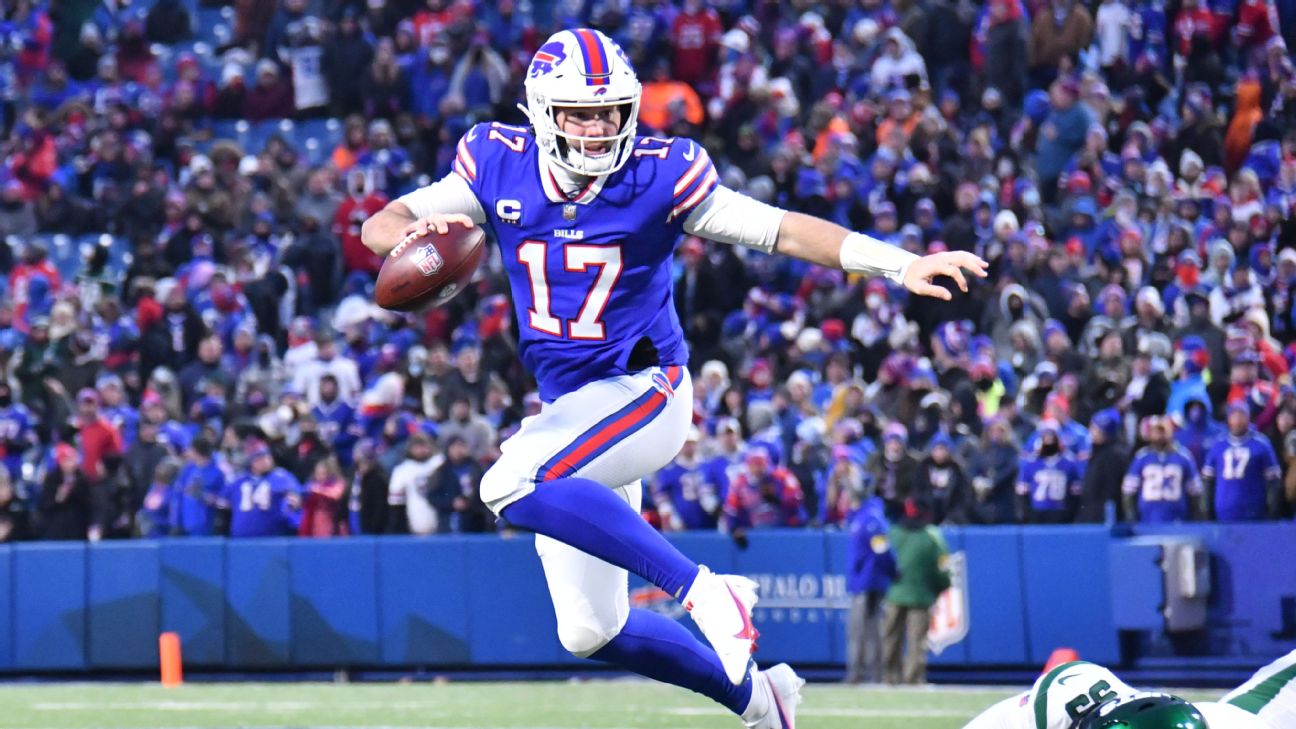 The Bills might have ended last season with a coin flip and heartbreak, but according to ESPN's Football Power Index, they enter the 2022 NFL season as the best team in football and the Super Bowl favorites.

Buffalo leads ESPN's FPI preseason ratings -- which were released on Tuesday -- and is about a half-point clear of Green Bay, the model's No. 2 team. Projections-wise, our FPI rankings see a fairly even field, with the Bills at the top with a 7% chance to win Super Bowl LVII, followed closely by the Rams (7%), Packers (6%), Chiefs (6%) and Chargers (6%).


But what is our Football Power Index? It is our predictive model that includes ratings and projections for every NFL team, from how good they are on defense to what their chances are of winning their division. During this offseason, ESPN Analytics executed an overhaul of the model, and a full description of changes and improvements can be found at the bottom. One key change to point out: The preseason version of FPI has been untethered from betting markets, which previously were heavy drivers of the offseason model.

But enough about the math, let's talk football. Here are eight takeaways from the 2022 ratings -- and a detailed explanation of changes to the model -- starting with the league's best team.

Chances to make the playoffs

It's not a shock to see the Bills at the top of the rankings, considering the team's performance last season. They closed the year looking like the best team in football, and quarterback Josh Allen had one of the greatest games of all time in Buffalo's 47-17 playoff victory over the Patriots. But No. 1 is No. 1, so what put Buffalo over the top for FPI?

It starts with Allen. The fifth-year QB ranks third in our predictive quarterback rating, behind only Tom Brady and Aaron Rodgers but ahead of Patrick Mahomes. He is obviously a threat through the air and on the ground, and he's a big reason why the Bills edge the other 31 teams here.

But as we saw from Buffalo last season, it doesn't end with Allen. The Bills boast a high-end No. 1 receiver in Stefon Diggs and an above-average offensive line, and they led the league in defensive efficiency last season. That came before signing Von Miller this offseason, which will only help the cause. There are not many holes on this team.

So even though the Bills are favorites to win the Super Bowl, why only 7%? The Chiefs, last year's top team going in, were at 19% in the 2021 preseason. In short, we upgraded our process to better account for the variance between teams' expected ability and what their actual ability turns out to be. Plus, there are quite a few contenders close to Buffalo's talent level. Thus, there are plenty of other teams that could end up better than Buffalo -- and of course, every team still has to manage at least three postseason wins to hoist the Lombardi Trophy, no matter how good they are on paper.

A middle class of contenders

The flip side of a lower probability for favorites to win the Super Bowl is that those percentage points have to go somewhere. And this year, they move to the second and third tiers of teams. It's not the immediate group of favorites, but rather the collection of squads that can win it all if player development, luck and injuries break right for them.

All four teams in the division rank between No. 4 and No. 14 in ESPN's FPI, so the model agrees it's a tight contest. But according to the projections, the Chiefs are again the best team in the AFC West.

Even without Tyreek Hill -- presenting a clear deficiency at WR1 -- and with what FPI believes to be an average defense, the Chiefs are on top thanks to Mahomes and a strong Kansas City passing offense. Offense, and particularly passing offense, is the most important part of team construction, so in the model's mind, an elite passing team will always beat out an elite rushing, rush defense or pass defense team, all else being equal.

But here's the interesting part: Even though it believes they are the division's best team, ESPN's FPI actually doesn't favor the Chiefs to win the AFC West. The Chargers and Broncos are both slightly more likely to win the division than the Chiefs -- and the Chargers have a better chance to earn the conference's No. 1 seed.

Why? It mostly comes down to schedule. In terms of average FPI rating of its opponents, no team has a rougher 17-game slate in front of it than the Kansas City. The Chiefs' three opponents that their division-mates don't face are brutal matchups: Tampa Bay, Buffalo and Cincinnati. Consider that the Chargers' opponents instead include the Falcons, Dolphins and Browns, while the Broncos get the Panthers, Jets and Ravens. That's a pretty big difference and a huge equalizer, even though the model believes Kansas City is the best team of the trio.

No love for the Bengals post-Super Bowl run?

Indeed, there is not. ESPN's FPI never bought in on the Bengals last season, and even with a model reboot in 2022, it still is awfully skeptical of them. Cincinnati ranks 16th in FPI rating and has the 18th-best chance to win the Super Bowl at 3%.

The model still isn't all the way in on quarterback Joe Burrow. He ranked 12th in Total QBR last season, and despite leading a postseason run, his QBR was still middle-of-the-road during the playoffs. The Bengals' excellent receiving corps and an upgraded offensive line help, but the team's defense is expected to be just OK.

Ultimately, our FPI model gives Cincinnati only the third-best chance to win a closely-contested AFC North at 24%, behind Cleveland (35%) and Baltimore (32%).

Chicago on the clock

We've got a brutally close race for the favorite to be the No. 1 pick in the 2023 draft, but the Bears edged out the Jets for the honor.

ESPN's FPI is down on Justin Fields after a pretty brutal rookie season in which he finished with the worst QBR among qualifying quarterbacks in the league. Edge rusher Khalil Mack and receiver Allen Robinson II are both gone, and while there are still a few good players remaining in the defensive front -- including edge rusher Robert Quinn and linebacker Roquan Smith -- there isn't a whole lot other strengths on the Bears' roster.

After last year's 12-5 season ended unceremoniously in a wild-card loss to the 49ers -- who could forget the spike that wasn't? -- our model forecasts a strong follow-up for the Cowboys. In fact, they are the highest-rated team that FPI believes has a better chance to win the Super Bowl (6%) than their odds at Caesars Sportsbook (18-1) indicate.

Offensively, our predictive expected points added (EPA) model remains fairly high on Dak Prescott despite a down season in 2021. The Cowboys' quarterback has demonstrated a high level of performance in the past -- he finished fourth in QBR in both 2017 and 2019 -- and remains in the prime of his career. Dallas also has two solid wide receivers in CeeDee Lamb and Michael Gallup, though we're working under the assumption of a healthy Gallup.


Defensively, the Cowboys are coming off an impressive season in which they ranked third in efficiency. And they return stars like Micah Parsons, DeMarcus Lawrence and Trevon Diggs.

ESPN's FPI likes the Buccaneers, as they rank No. 5 in the model's rating system and are just 0.2 and 0.3 points per game behind the Chiefs and Rams, respectively. But the FPI projections are not all that fond of Tampa Bay's chances this season, giving us a closer-than-expected race for the NFC South. ESPN's FPI makes the Bucs just a 43% favorite to win the division, with the Saints fairly close behind at 32%. Why is New Orleans so close? There are two major factors:

Are the 49ers overrated?

The short answer is our FPI says yes, they are. The long answer is it depends on the quarterback.

ESPN's FPI, for now, is assuming that it's Trey Lance under center. After all, San Francisco paid a steep price to trade up and select Lance at No. 3 in the 2021 draft. If he were to not be starting quarterback by Year 2, that would signify a major failure (not that focusing on sunk costs makes sense). And if it is Lance, the model doesn't see how the 49ers could possibly justify a win total of 10 and be considered one of the better teams in the NFC.

Our quarterback rating docks QBs who don't play, under the reasonable assumption that one way or another not playing is a bad sign (injury or just not being good enough). Our model acknowledges that Lance came in as a strong prospect, but after just 71 pass attempts during his rookie year, it views Lance in the same range as players like Matt Corral, Joe Flacco, Justin Fields, Zach Wilson, Andy Dalton and Nick Foles. There's upside there, of course, and perhaps he stars in his first season as a starter. But the mean expectation for Lance can't yet be great.

So while receiver Deebo Samuel and edge rusher Nick Bosa are superstars, the run defense is strong and Kyle Shanahan is a good coach, it's hard to overcome a relative liability at quarterback. And that's our best guess for Lance at this point. As a result, the 49ers are way down in the FPI rankings at No. 24 -- behind the Giants and Lions -- and carry just a 39% chance at making the playoffs.

Wondering where the 49ers would rank ifJimmy Garoppolowere to return as the starter in 2022? They would move up to 13th in the FPI rankings. It's a big jump, fueled by the fact that Garoppolo has posted decent QBRs throughout his career -- which is a lot better than what the model assumes the 49ers will get from Lance in 2022 on average.

ESPN's FPI was upgraded and modified this offseason. For the preseason version that we discuss here, the most notable change was moving away from gambling lines as an input. We previously used win totals paired with the schedule as a significant driver of preseason ratings, but betting markets are no longer in the model. Instead, preseason ratings are determined through a combination of past team performance, our predictive EPA/play metric for all starting and backup quarterbacks, and a predictive rating for non-QB starters based on an ensemble of several player ratings, including Pro Football Reference's approximate value and our own win rates for offensive and defensive linemen.

Our FPI also now includes predictive unit ratings that can be broken out into run and pass games (e.g. rushing offense, pass defense, etc.). The game prediction model considers each of those unit ratings and factors in how frequently an offense passes above or below expectation given a game situation. For instance, the Chiefs' offensive advantage from passing is slightly more pronounced than it would be for a typical team because they pass more often than most after controlling for the game scenario. The model also now dynamically updates to reflect the current degree of home-field advantage.

We also upgraded the way the model handles uncertainty within our projection system. While each team's FPI rating is our best estimate for how strong that team is relative to a league-average opponent, the model recognizes that there are significant error bands around that estimate. Therefore, in some estimates each team's rating will be higher than our best estimate, and in others it will be lower. That gives a more realistic simulation overall, as well as more realistic projections based on a certain scenario. For example, if we ask the model for the Jets' chances to win the Super Bowl if they start 4-0, the resulting simulations where the Jets do go 4-0 are more likely to be those where their rating is higher than what we expect. Therefore, those ratings and simulations determine the Jets' Super Bowl chances after the 4-0 start. 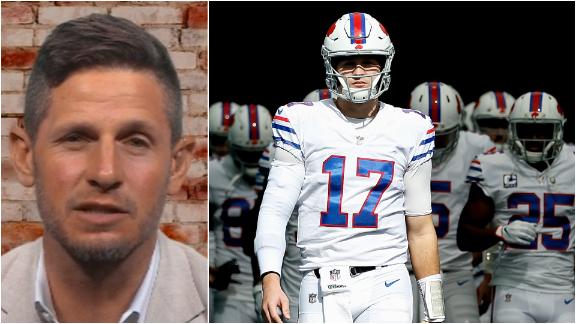