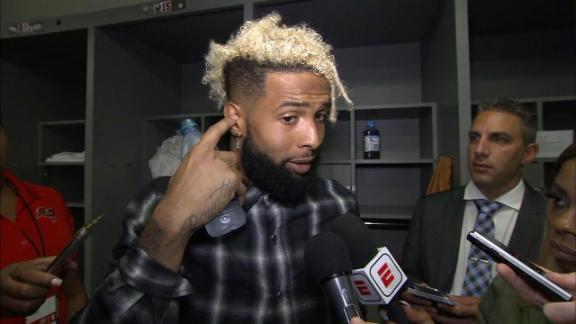 Beckham ran off the field with his hand in the air in the second quarter after the ball slammed off his finger. The trainers attended to it when he reached the sideline.

He was back on the field the following series.

"Yeah. Just popped out. It's not the first time," said Beckham, who had a similar problem with a different finger late last season. "It's not a comfortable feeling. You run off, and your finger is out of place."

Beckham finished the game and caught five passes for 67 yards in the second half. He finished with seven catches on 15 targets for 90 yards.

The Pro Bowl receiver said the finger was swollen, but it wouldn't be a problem moving forward.

That provided a scare, but only for a few minutes.

"It's good. I came down in kind of the same motion that injured it. But came out of it fine," Beckham said. "At the moment, the pain that you go through right then and there ... you'll overcome it. Just at the time, it was something that scares you for a second. It's the same motion that happened, so ... I'll be all right."

Beckham originally injured the ankle during a preseason game against the Cleveland Browns. The injury forced him to miss the opener, and he returned in a limited capacity in Week 2 against the Detroit Lions.

He hasn't been quite himself since returning. Beckham is still looking for his first 100-yard receiving game this season and is averaging just 8.8 yards per catch. He averages 14.1 yards per catch for his career.

Beckham already has four drops this season. He had seven last season, after just six in his first two seasons combined.