Patriots to be without Mayo, Ridley 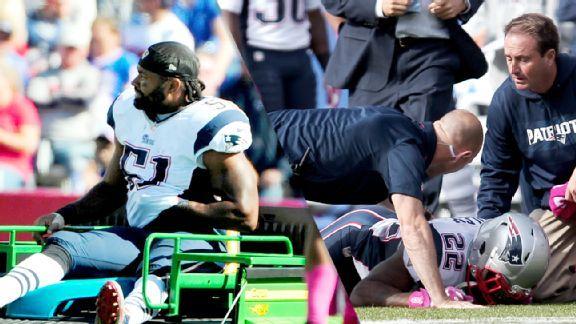 FOXBOROUGH, Mass. -- The New England Patriots on Monday ruled out linebacker Jerod Mayo and running back Stevan Ridley for Thursday night's game against the New York Jets because of knee injuries, and sources said both players are out for the rest of the season.

The Patriots have not commented on the extent of the injuries, but multiple sources told ESPN NFL Insider Adam Schefter that Mayo's injury to his right knee "is bad." Also, a source told ESPNBoston.com's Mike Reiss that Ridley tore an ACL and MCL.Both players were scheduled for MRIs on Monday.

"Unfortunately I don't think it looks too good, but we'll see what we get back [from tests]," coach Bill Belichick said Monday afternoon in his weekly interview on Boston sports radio station WEEI. "We'll wait until we get more specific information, but I don't think it's minor, let's put it that way."

Mayo injured his right knee in the second quarter of Sunday's 37-22 win over the Bills. Players gathered around Mayo before he was carted off, which seemed to show the severity of the injury. After the game, Mayo was seen on crutches and wearing a compression sleeve on his right knee.

Ridley injured his knee on a running play in the third quarter. He has 94 carries for 340 yards and two touchdowns this season and does not have a fumble.