Rangers can pay most for Shohei Otani, followed by Yanks, Twins 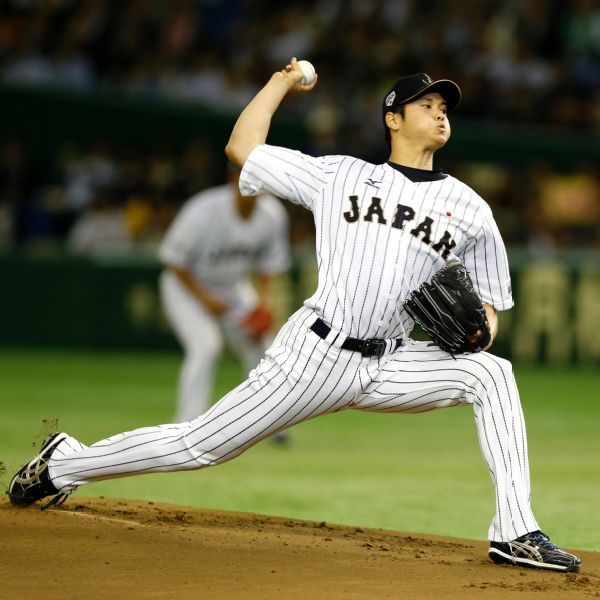 ESPN
NEW YORK --Texas, the New York Yankees andMinnesotacan pay the most to a young international amateur free agent as highly touted pitcher-outfielder Shohei Otani prepares to enter the market, and Major League Baseball and its Japanese counterpart have agreed to the outlines of a deal to keep the old posting system for this offseason.

The Rangers can agree to a maximum $3,535,000 signing bonus from their pool that covers July 2 through next June 15, according to figures compiled by Major League Baseball and obtained by The Associated Press. New York can pay $3.25 million and the Twins $3,245,000.

Twelve teams are capped at $300,000 as penalties for exceeding their signing bonus pool under baseball's previous collective bargaining agreement, which did not have a cap: Atlanta, the Chicago Cubs and White Sox, Cincinnati, Houston, Kansas City, the Los Angeles Dodgers, Oakland, St. Louis, San Diego, San Francisco and Washington.

Each team started with a pool of $4.75 million, $5.25 million or $5.75 million, and amounts could be traded. Most of the pool money already has been spent on Latin American prospects.

Under baseball's new collective bargaining agreement, the 23-year-old Otani can only agree to a minor league contract that is subject to signing bonus pools. If added to a big league roster, he would have a salary for about the minimum $545,000 next season and not be eligible for salary arbitration until 2020 at the earliest.

If he waits until he is 25 to enter MLB, there would be no restrictions and he likely would get a deal for more than $100 million. MLB has warned of severe penalties if a team attempts to sign Otani to a secret long-term contract, then announces it in future years.

Otani chose the Creative Artists Agency's Nez Balelo to represent him, a person familiar with the decision told the AP this week, speaking on condition of anonymity because no announcement had been made.

While the posting agreement between MLB and Nippon Professional Baseball has expired, the sides agreed several weeks ago to the outlines of a deal that would for this offseason continue the rules of the previous agreement, a person familiar with that negotiation said, also speaking on condition of anonymity because no announcement was made. The rules call for the Japanese club to set a maximum $20 million posting fee, and any MLB club willing to bid that amount would be able to negotiate with Otani for 30 days.

Starting next offseason, the fee would be 15 percent of the guarantee of a major league contract and 20 percent of the signing bonus if a player is subject to bonus pools, the person said. MLB is waiting for the players' association to approve the agreement before submitting it to MLB owners for their ratification, the person said.

Otani is the reigning Pacific League MVP and is 3-2 with a 3.20 ERA this year for the Nippon Ham Fighters, limited because of thigh and ankle injuries. He is batting .332 in 65 games with 16 doubles, eight homers and 31 RBIs.

He has a 42-15 record with a 2.52 ERA and 624 strikeouts in 543 innings over five seasons, and a .286 batting average with 48 homers and 166 RBIs.
Report a correction or typo
Related topics:
sportsespnshohei otaniprospecttexas rangersmlbminnesota twinsjapannew york yankees
Copyright © 2020 ESPN Internet Ventures. All rights reserved.
More Videos
From CNN Newsource affiliates
TOP STORIES