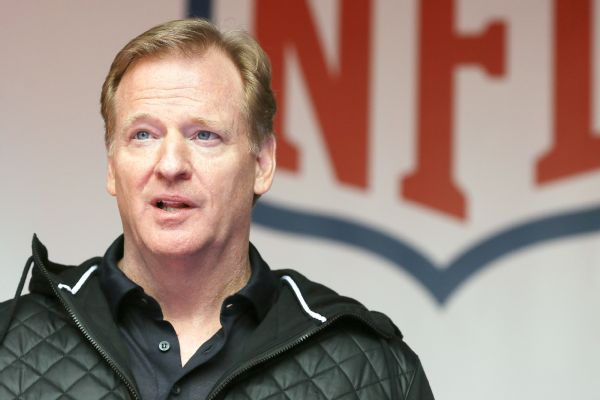 NFL commissioner Roger Goodell said Wednesday that the league does not think it has lost viewers despite a 10 percent drop in television ratings this season.

At the same time, however, he acknowledged that league officials are trying to understand what has caused the drop and how to address it.

Speaking after the league's fall meetings in Houston, Goodell said it is important not just to get viewers tuned in but also to "get them to stay tuned in" to game broadcasts.

"When you look at ratings you have to go deeper than that," Goodell said. "Its viewers, but also how long they're engaging for, and a lot of times, people will leave a game for whatever reason, whether it's to go to other programming or whether the game is not that competitive."

Goodell said neither he nor the league's broadcast partners believe player protests of the national anthem have played a role in the drop. But he did note a relative lack of competitive games in prime time and the contentious presidential election and debate schedule as partial explanations.

"There a lot of factors to be considered," he said. "We don't make excuses. We try to figure out what's changing."

Also at the meetings, Goodell heard what he called a "factual" presentation of theOakland Raiders' interest in relocating to Las Vegas. Goodell, however, said "there is still a great deal of information that we need to gather with respect to the circumstances in Oakland and also the challenges," indicating that resolution of the issue shouldn't be expected quickly.

Nevada lawmakers recently approved $750 million in public money to be used toward a domed stadium that would open in 2020. Billionaire casino mogul Sheldon Adelson has pledged $650 million toward the project, but Goodell said NFL owners have not been briefed on the structure of that offer. The Raiders could apply for relocation as early as January 15, 2017.

There will be follow-up discussion "maybe as early as December but more likely later than that," Goodell said.

In other meeting news: