Ryan Fitzpatrick to start for Texans 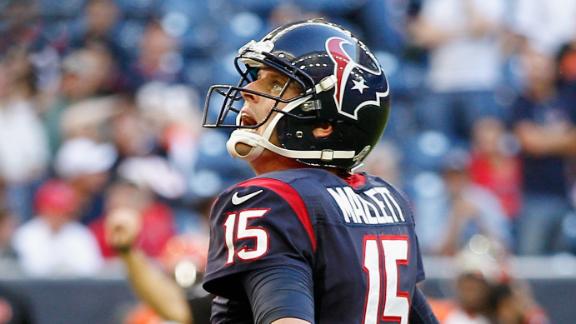 HOUSTON -- The Texans placed quarterback Ryan Mallett on injured reserve on Wednesday, meaning Ryan Fitzpatrick will start on Sunday against the Tennessee Titans.

Fitzpatrick started the first nine games, with a 4-5 record, before being benched during the bye week in favor of Mallett, who went 1-1 as the starter.

Fitzpatrick made it clear after he was benched that wasn't easy. But he handled it professionally, as he promised he would. He and his teammates are expecting to pick back up on a lot of what they worked on during his first span as a starter.

Said Fitzpatrick: "All the experiences that have happened through my first eight or nine games, the timing with Andre [Johnson], DeAndre [Hopkins], the tight ends, DJ [Dennis Johnson], those guys, that stuff still carries over."

He admitted there might have been some positives to seeing things from a different perspective. He got a more complete view of the offense during the game and saw how plays are called.

"The last few weeks have been interesting, taking a step back and kind of watch the offense go," Fitzpatrick said. "For me to go back out there, it's kind of like a second chance for me, I guess. There's a lot of times when you don't have that opportunity, maybe. ... I didn't know if I'd have a chance to go out there and play again. Renewed sense of excitement, energy, whatever it is."

Fitzpatrick is a 10-year NFL veteran, who has thrown for 1,960 yards with 11 touchdowns and eight interceptions this season.

Also on Wednesday, the Texans signed free agent quarterback Thad Lewis, who was released by the Bills in training camp. Tom Savage, a fourth-round pick, is Houston's other quarterback.

ESPN.com's Tania Ganguli and The Associated Press contributed to this report.