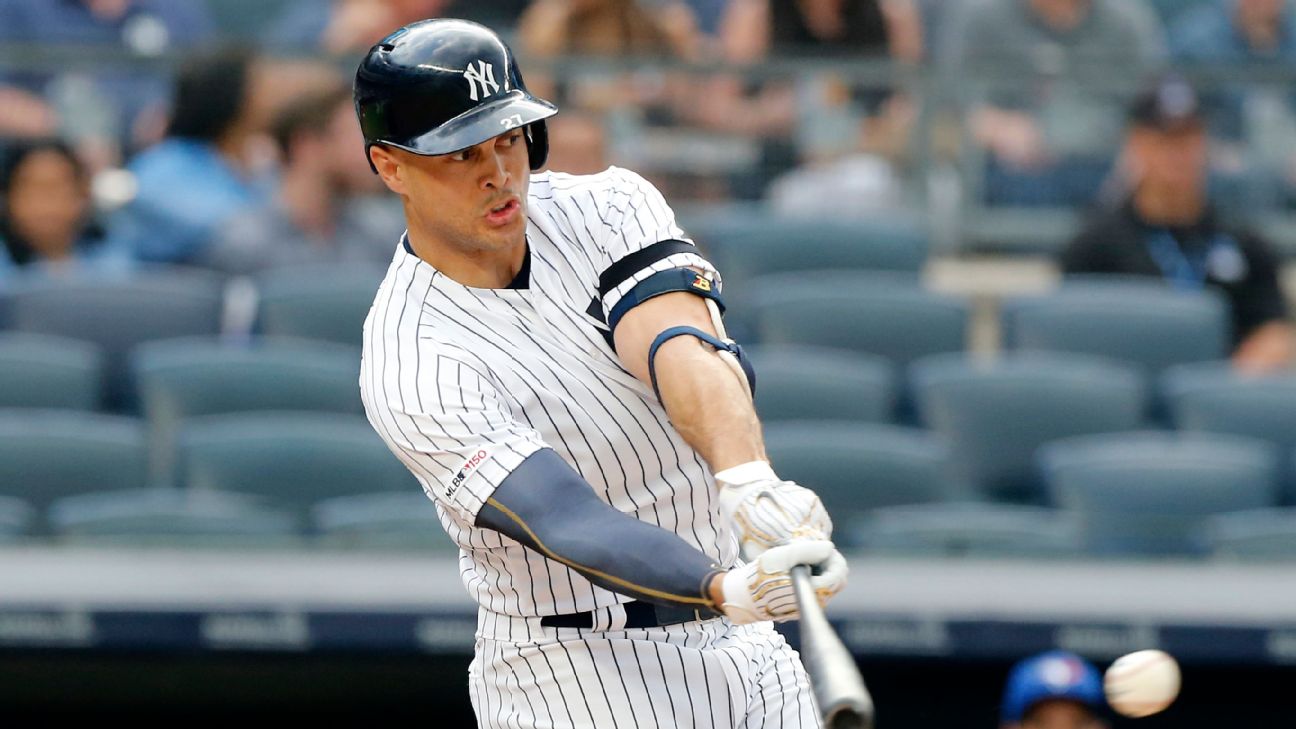 NEW YORK -- New York Yankees outfielder Giancarlo Stanton will head to the team's minor league complex in Tampa, Florida, this week for batting practice, among the final steps before returning for the final weeks of an injury-wrecked season.

"I feel like he's really starting to build some momentum and doing pretty well," Yankees manager Aaron Boone said before Wednesday's homestand finale against Texas. "He'll start getting regular at-bats this weekend and, hopefully, really starting to ramp him up."

The 29-year-old slugger has been limited to nine games with the Yankees this season. He strained his left biceps March 31 in his third game, strained a shoulder and calf during his rehabilitation and did not return until June 18. Just a week later, he strained the posterior cruciate ligament in his right knee during an awkward headfirst slide into third base.

Stanton is hitting .290 with one home run and seven RBIs. He took batting practice Tuesday against reliever Dellin Betances, who hopes to return this month from a lat injury that has sidelined him since spring training.

Betances and right-hander Luis Severino were scheduled to pitch at Double-A Trenton on Friday rather than for Triple-A Scranton/Wilkes-Barre. The RailRiders are at Durham, North Carolina, which could have rain related to Hurricane Dorian. Severino, also out with a lat injury, pitched one inning for Scranton on Sunday in his season debut.

Left-hander CC Sabathia, on the injured list for the fourth time in his final season, tested his chronically painful right knee by playing catch for the second consecutive day.

Left-hander Jordan Montgomery allowed two runs and five hits over three innings for Trenton on Wednesday in his third appearance since Tommy John surgery on June 7 last year. He struck out five and walked none.

Boone said 20-year-old right-hander Deivi Garcia will remain at Scranton for the rest of the International League playoffs. Garcia is 1-3 with a 5.40 ERA in six starts and five relief appearances since his promotion to the RailRiders in July, striking out 45 and walking 20 in 40 innings.

"I think he's still kind of finding his way at that level," Boone said. "He's a very young guy and still developing in a lot of ways."

Infielder Gio Urshela, who hurt his right groin Aug. 28, ran the bases and could be activated when eligible Sunday at Boston.

Third baseman Miguel Andujar, recovering from season-ending surgery May 20 to repair a torn labrum in his right shoulder, plans to start throwing next week and expects to be ready for spring training.

"It's stronger now. It definitely feels better than it did before," Andujar said through an interpreter. "I'm very happy with the work that they did. It's showing progression."
Report a correction or typo
Related topics:
sportsespnmlbgiancarlo stantonnew york yankees
Copyright © 2020 ESPN Internet Ventures. All rights reserved.
More Videos
From CNN Newsource affiliates
TOP STORIES