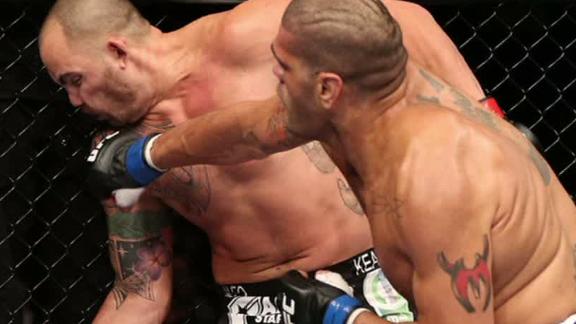 ALBANY, N.Y. -- About one-third of professional mixed martial arts matches end in knockout or technical knockout, indicating a higher incidence of brain trauma than boxing or other martial arts, according to a new study in the American Journal of Sports Medicine.

University of Toronto researchers examined records and videos from 844 Ultimate Fighting Championship bouts from 2006 to 2012 for the study published this month. They found that 108 matches or nearly 13 percent ended in knockouts. Another 179 matches, or 21 percent, ended in technical knockouts, usually after a combatant was hit in the head five to 10 times in the last 10 seconds before the fight was stopped.

"We're taking the premise with this that what you see on TV is one thing, but to kind of add scientific rigor to document it objectively," said Michael Hutchison, co-author and director of the concussion program at the university's MacIntosh Sports Medicine Clinic.

With the technical knockouts, or TKOs, they reviewed videos and found "an increasing number of repetitive strikes to the head" during the last 30 seconds of a match, he said.

Officials from UFC, the sport's major brand, seeking approval to stage bouts in New York have argued that mixed martial arts has evolved over 20 years with many safety regulations to protect fighters, including mandatory suspensions after concussions. They say it's safer than boxing, where fighters tend to take repeated blows from padded gloves, with no history of deaths or traumatic brain injuries sustained in the ring.

"By partnering with the Cleveland Clinic, one of the world's leading medical research institutions, on advanced studies aimed at not only preventing long-term brain injuries, but also identifying those predisposed to them, the UFC demonstrates true commitment to the safety of all professional athletes," Epstein said.

Preliminary results from the Cleveland studies found athletes with higher exposure to head trauma -- based on a formula including number of fights, years fighting and fights per year -- were likelier to score lower on cognitive testing. Researchers conducting the free, ongoing assessments of fighters' brain health are examining factors like genetics, lifestyle or head trauma exposure and susceptibility to injury.

The Toronto researchers, who examined UFC matches, found the time from a knockout blow -- often a punch to the jaw -- until matches were stopped averaged 3.5 seconds with losers on average getting hit 2.6 more times to the head. With TKOs, they found that in the last 30 seconds before a match was stopped the loser was hit on average 18.5 times, 92 percent of those to the head.

Hutchison acknowledged that unlike the knockouts, which meet the criteria for brain concussions, they can't definitively identify the particular injury from a TKO. Professional rules say that happens when a referee stops a fight because one competitor can no longer defend himself. "We can accurately suggest ... this can't be good for their health," he said.

The researchers proposed introducing rules like in boxing where a fighter gets a 10-second count and evaluated after a knockdown. They also proposed more training to help referees to identify fighters who are defenseless or have lost consciousness so they can stop fights more quickly.

"Given that participation at amateur levels of the sport is growing rapidly, we expect to see high rates of traumatic brain injuries at more junior levels of amateur competition," the researchers wrote. "These points strongly argue for banning the sport in youth and for preventive strategies to reduce the burden of traumatic brain injuries in professional MMA fighters who elect to fight."

Hutchison wasn't saying whether mixed martial arts should be legal or not, only that adults should know the risks so they can make informed decisions. People are inherent risk takers, and some do it with drinking, smoking, skydiving or other activities, but they should be aware, he said.

Most states have legalized and regulated professional mixed martial arts although some are silent on the matter. New York is the only state that prohibits such fights and longstanding efforts to get it legalized recently stalled again for advocates hoping to gain access to Madison Square Garden and other New York venues.

The state Senate has passed the bill for several years and put it in a proposed budget for the upcoming fiscal year, but it has not cleared the state Assembly.

New York state Sen. Joseph Griffo sponsored legislation that would legalize the sport and subject amateur mixed martial arts to state oversight that would include more stringent rules and regulations like those employed by amateur boxing. Regulation would also help the state go after the underground fights with paying audiences that are occurring now, especially in New York City, he said.

"I think everybody would agree the objective is to be very sensitive and do everything possible with preventing trauma to the head," Griffo said. "I don't think in any way that should prevent the sport."