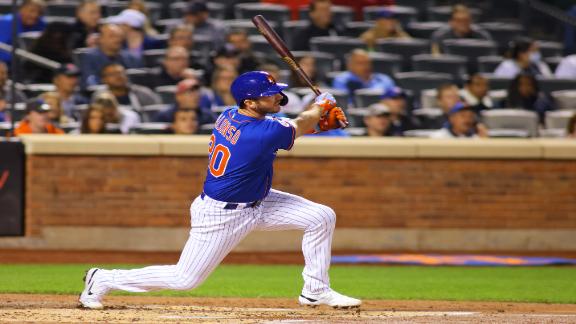 NEW YORK -- - Michael Conforto's eyes already were red when he reached the dugout, and as teammates hugged him they filled with tears.

In what might have been his final game at Citi Field for the New York Mets, he had a pair of run-scoring, two-out singles, then made a tumbling, shoestring catch in right field in the ninth inning that sparked a standing ovation.


"There were a lot of emotions taking the field," he said after the Mets routed the Miami Marlins 12-3 on Thursday night in their home finale. "It all hit me kind of towards the end of the game and obviously making that play and hearing the reaction from the fans."

Manager Luis Rojas, nearing the end of New York's disappointing first season under new owner Steven Cohen, also might have been at his final home game. New York finished 47-34 at Citi Field and headed to NL East champion Atlanta with a 29-49 mark on the road, assured of a losing record for the fourth time in five years.

Conforto, the 10th overall pick in the 2014 amateur draft, acknowledged having trouble sleeping ahead of his last home game before free agency. He is hitting .228 with 13 homers and 53 RBI and is making $12.25 million.

After his catch on Joe Panik in the ninth, Conforto raised a hand and tapped his heart.

"This is a guy that bleeds blue and orange," Rojas said.

A 28-year-old son of an Olympic synchronized swimmer, Conforto spoke to his teammates, too.

"My message to them was: It's been a tough year. It's been a grind for all of us," he said.

"To play on a team that's going to win, it's definitely going to be a big part of my consideration," Conforto said.

"He's one of the best teammates I have had in my career. I've had a lot of good ones," Lindor said of Conforto.

First, as Lindor said, "We got to have a front office. I know we have Sandy, but we didn't have a GM since the beginning."


Conforto knows he faces a wait.

"We'll see what happens in the future. But I definitely - I loved every second that I was blessed to play here," Conforto said. "It's just love. And it's just mutual."

Rich Hill gained his first win in 13 appearances with the Mets, who acquired the 41-year-old left-hander in July from Tampa Bay. Hill (1-4 with the Mets and 7-8 overall) allowed three runs - two earned - and six hits in five innings.

McCann ended an 0-for-16 slide with a go-ahead, two-run double in a four-run fourth inning off rookie Sean Guenther (0-1).

Miami lost for the eighth time in nine games and dropped into a tie with Washington for last in the NL East at 65-94. León made his sixth mound appearance this season.

Lewis Brinson put the Marlins ahead with a two-run homer in the third off the facing of the left field second deck.

Guenther, who lost his first big league decision, entered when starter Edward Cabrera left due to a blister on the middle finger of his pitching hand.

"Guys don't like coming out of games, but sometimes you just have to protect them," Marlins manager Don Mattingly said.

Miami's Magneuris Sierra made a leaping catch at the center field wall to rob Alonso in the fourth.


The Mets drew 1,511,926 as fans returned this year following a pandemic-shortened 2020 season played without spectators. Capacity did not reach 100% until June 21.

After throwing 10 pitches during a 1-2-3 inning Tuesday in his return from Tommy John surgery, Syndergaard will start Sunday's regular-season finale. His appearance against Miami this week was the first in the major leagues for the 29-year-old since Sept. 29, 2019.

Marlins players applauded the 30-year-old Panik when he hit in the ninth.

"I know it will be his last at-bat this year. His wife is pregnant," Mattingly said. "Anything further than that it wouldn't be my place to talk about."

Marlins: RF Jesus Sánchez left in the middle of the third inning with right hamstring tightness after not running out a fly ball in the top half.

Mets: RHP Robert Gsellman, sidelined since June 19 by a right lat strain, will accompany the Mets to Atlanta and could be activated.