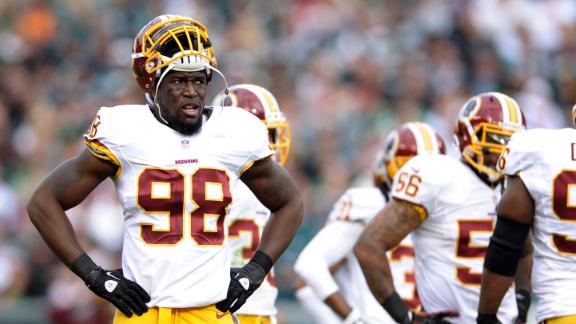 The Tennessee Titans shored up their linebacking depth chart Friday, reaching agreement on contracts with outside linebackers Brian Orakpo and Derrick Morgan, according to sources.

Orakpo, who spent his first six seasons with the Washington Redskins, will make about $8 million annually, his agent confirmed to ESPN.com's John Keim. Ben Dogra of Relativity Sports said Orakpo has agreed on a four-year, $32 million deal that could max out at $35 million with incentives and includes $13.5 million in guaranteed money.

Dogra told The Associated Press that Orakpo is "really happy to be a Tennessee Titan."

The Titans also are bringing back Morgan, a source told ESPN.com's Paul Kuharsky, confirming an earlier report by The Tennessean. The newspaper said Morgan will get a four-year deal worth $30 million. Morgan, 26, was drafted out of Georgia Tech in the first round, 16th overall, by the Titans in 2010.

Orakpo is coming out of Washington's 3-4 defense. The 28-year-old pass-rusher had torn pectoral muscles for two of the past three seasons, but when healthy he averaged almost 10 sacks a season, including 10 in 2013.

The Redskins had used their franchise tag on Orakpo in 2014. He played in only seven games last season before suffering a torn pectoral for the third time since the end of the 2011 season. Before getting hurt, Orakpo had recorded half a sack.

Orakpo reached the Pro Bowl three times while with Washington. He missed one game in his first three seasons but a combined 24 in his next three thanks to the pectoral tears.

One knock on him has been a lack of game-changing plays: Orakpo has forced just six fumbles and intercepted one pass in his career.

Morgan, after suffering a torn ACL in the fourth game of his rookie year, has proved to be durable.

In four subsequent seasons, he missed just two games. In 66 career games, he has 23 sacks and has shown a penchant for getting close and just missing on a lot of other plays. He's also forced four fumbles, recovered two and made 24 tackles for a loss.

The Titans brought him into the NFL as a 4-3 defensive end, but he shifted to outside linebacker as the Titans moved to a 3-4 scheme in 2014. Coach Ken Whisenhunt and defensive coordinator Ray Horton praised his play.

Tennessee has also reached agreement on a one-year deal with place-kicker Ryan Succop, a source told Kuharsky, confirming an earlier report by The Tennessean.

Succop, 28, was brought in as the Titans' place-kicker after he was cut by Kansas City just before the 2014 season.