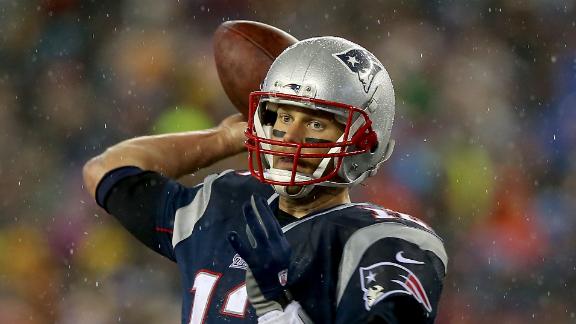 FOXBOROUGH, Mass. -- New England Patriots quarterback Tom Brady said Thursday that he has not yet been contacted by the NFL about its investigation into underinflated footballs, adding: "I didn't alter the ball in any way."

In a news conference that lasted a little more than 30 minutes, Brady detailed how he selected 24 footballs for referees to inspect before Sunday's AFC Championship Game against the Indianapolis Colts.

The NFL found that 11 of the Patriots' 12 game balls from their 45-7 win over the Colts were inflated significantly below the NFL's requirements, league sources involved and familiar with the investigation of Sunday's game told ESPN's Chris Mortensen.

NBC News reported that Brady addressed the issue with his teammates Thursday, saying in a closed-door meeting that he likes footballs "a certain way" and that they should stay focused on the Super Bowl. When asked by reporters what he told teammates, Brady said those conversations were personal.

In his news conference, Brady said there's a usual process he goes through in getting used to using game-day footballs, explaining it's like any other piece of equipment for him and that he prefers the football to be inflated at 12.5 pounds per square inch, which is the lowest end of the league requirement. "To me, that's a perfect grip for the football," he said.

Brady said he didn't notice a difference between the footballs from the first half to the second half on Sunday.

"I'm not squeezing them, that's not part of my process," Brady said. "I grab it. I feel the lace, the leather. I feel the tack on the ball. That's really what you go for."

Asked if he sought out members of the Patriots' equipment staff to inquire if they altered the balls in any way Sunday, Brady said: "Yeah, and they haven't, and I believe them. They also know how I like it and that's exactly the way they are."

The quarterback repeatedly professed his innocence regarding the issue of doctored footballs.

"I feel like I have always played within the rules," he said. "I would never break the rules."

Under NFL rules, no alteration of the footballs is allowed once they are approved by league officials. If a person is found breaking league rules and tampering with the footballs, that person could face up to a $25,000 fine and potentially more discipline.

When asked by ESPN.com if the league had reached out to Brady, NFL public relations rep Brian McCarthy said: "We are not commenting on details of the review at this point."

Brady also echoed the earlier sentiment of his coach, Bill Belichick, in saying he was stunned by the news of the illegal footballs.

"I was as surprised as anybody when I heard Monday morning what was happening," Brady said.

At that time, during his weekly interview on sports radio WEEI, he laughed at the talk about underinflated footballs, calling it "ridiculous." On Thursday, he struck a much more serious tone.

"I was very shocked to hear it, so I almost laughed it off thinking that was more sour grapes than anything," he said. "And it ends up being a very serious thing when you start learning the things that were ... just the integrity of the game."

In an 11-minute interview Thursday morning, Belichick said he was "shocked" when informed of the allegations that his team used balls that were deflated after they were inspected by officials before Sunday's game.

"I was shocked to learn of the footballs on Monday. I had no knowledge until Monday morning," Belichick said. "I'd say I've learned a lot more about this process in the last three days than I knew, or had talked about it, in the last 40 years that I've coached in this league."

Belichick said that because of this controversy, the Patriots will make one change in the future by inflating footballs beyond the minimum specifications of 12.5 PSI.

The coach added that the team is fully cooperating with the NFL's investigation.

When asked during his news conference if he thought the whole incident has been blown out of proportion, Brady said, "Yeah."

"This isn't ISIS, this isn't, you know, no one's dying," Brady said. "But you know, we'll get through this and hopefully we can really start preparing for Seattle and, you know, get our mind focused there, because they're going to take, you know, all my mental energy for the next 10 days."

The inflation of game balls is not expected to be an issue Feb. 1 when the Pats play the Seahawks in Super Bowl XLIX. As per its custom, the NFL follows a modified set of procedures to prepare game balls for the Super Bowl. Established long before the allegations against the Patriots, the process includes independent equipment managers and ball attendants.

"It's definitely a distraction for them. That's kind of all the media is talking about right now. I'm glad it's their problem and not ours."

Information from ESPN.com's Kevin Seifert, Darren Rovell and Terry Blount is included in this report.

Brady Denies Any Wrongdoing
Patriots QB Tom Brady addresses the media regarding allegations that New England used footballs that were deflated after they were inspected by officials before the AFC Championship Game.

NFL Has Not Yet Talked To Brady
Dan Graziano breaks down the latest on the NFL's investigation as to why 11 of the 12 footballs used by the Patriots during their playoff game against the Colts were underinflated.

Brady Telling The Truth?
The "NFL Live" experts debate whether they believe Tom Brady is telling the truth about not knowing the footballs used during the AFC Championship Game were under-inflated.

Preparing A Football
Former Jaguars equipment manager Drew Hampton discusses an equipment manager's responsibilities and role in preparing footballs before games and weighs in on the underinflated footballs used by the Patriots in the AFC Championship Game.

Belichick: I Don't Have An Explanation
Patriots coach Bill Belichick addresses the media regarding allegations that his team used footballs that were deflated after they were inspected by officials before the AFC Championship Game.

Deflategate Ramifications
Adam Schefter and Louis Riddick discuss the distraction of Deflategate to the Patriots and a timeline for punishment from the NFL.