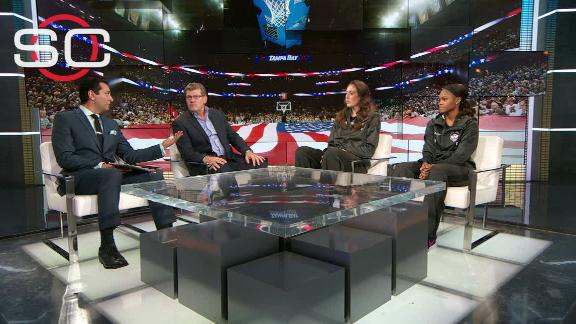 ESPN
Geno Auriemma and the UConn Huskies are starting this season right where they left off: at No. 1.

It's the 11th time that the Huskies are the top choice in The Associated Press preseason poll, which was released Tuesday. UConn went on to win the national championship in seven of those years, including the last two seasons.

"I think it's part of the culture that we have hopefully created here where the expectations are really high," Auriemma said. "Not just the outside world's expectations, those are our expectations. We want to be viewed, year in and year out, as one of the best teams in the country."

The Huskies received all 32 first-place votes from the national media panel Tuesday and will be trying for an unprecedented fourth straight national championship this year.

"It's certainly not something you take for granted, but at the same time when you've been in that situation enough times, you get to appreciate a lot of those times we weren't No. 1 and won the national championship," Auriemma said. "That's when you realize that the key is finishing the season No. 1, not what you're ranked in the preseason."

South Carolina was second with Notre Dame, Tennessee and Baylor rounding out the first five. The Gamecocks were also No. 2 in the preseason poll last year.

The Atlantic Coast Conference leads the conferences in preseason ranked teams with six. Notre Dame is the ACC's highest-ranked team followed by No. 7 Florida State, No. 8 Louisville, No. 14 Duke, No. 22 North Carolina and No. 23 Syracuse.

The Southeastern Conference has five teams. Joining South Carolina and Tennessee are No. 11 Mississippi State, No. 13 Texas A&M and No. 18 Kentucky. The Big Ten has four teams while the Pac-12 and Big 12 each have three. South Florida joins UConn from the American Athletic Conference.

Expectations are also high for No. 19 Northwestern, which is ranked in the preseason poll for the first time since 1990. Joe McKeown's squad, which was ranked for four weeks last season, is led by junior Nia Coffey, who scored in double figures in 31 games last year and had over 20 in seven of those contests.

After ending a 31-year absence from the poll last season, Jim Foster has Chattanooga in the preseason poll for the first time in school history, at No. 25.