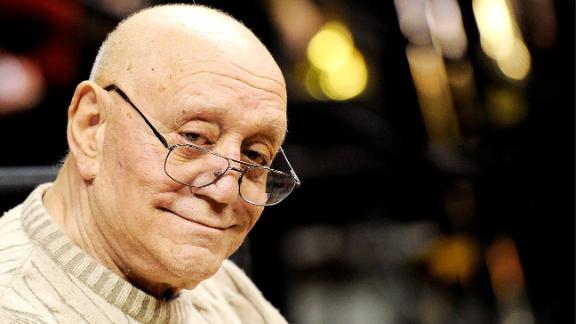 LAS VEGAS -- Hall of Fame coach Jerry Tarkanian, who built a basketball dynasty at UNLV but was defined more by his decades-long battle with the NCAA, died Wednesday after several years of health issues. He was 84.

Tarkanian had been hospitalized since Monday at Valley Hospital Medical Center for a respiratory ailment and infection. He had been rushed to the hospital by ambulance after his blood oxygen fell to dangerous levels.

The towel-chewing "Tark the Shark" put the run in the Runnin' Rebels, taking them to four Final Fours and winning a national championship in 1990 with one of the most dominant college teams ever. His teams were as flamboyant as the city, with light shows and fireworks for pregame introductions and celebrities jockeying for position on the so-called Gucci Row courtside.

He ended up beating the NCAA, too, collecting a $2.5 million settlement after suing the organization for trying to run him out of college basketball. But he was bitter to the end about the way the NCAA treated him while coaching, and carried the grudge the rest of his life.

"They've been my tormentors my whole life," Tarkanian said at his retirement news conference in 2002. "It will never stop."

Tarkanian was an innovator who preached defense yet loved to watch his teams run. And run they did, beginning with his first Final Four team in 1976-77, which scored more than 100 points in 23 games in an era before both the shot clock and the 3-point shot.

He was a winner in a city built on losers, putting a small commuter school on the national sporting map and making UNLV sweatshirts a hot item around the country. His teams helped revolutionize the way the college game was played, with relentless defense forcing turnovers that were quickly converted into baskets at the other end.

He recruited players other coaches often wouldn't touch, building teams with junior college transfers and kids from checkered backgrounds. His teams at UNLV were national powerhouses almost every year, yet Tarkanian never seemed to get his due when the discussion turned to the all-time coaching greats.

"It's another sad day for those who love college basketball and the people who have contributed so much to our game," North Carolina coach Roy Williams said in a statement Wednesday. "'Tark' was a great coach, better than people gave him credit for, and he loved college basketball."

That changed in 2013, when Tarkanian was elected to the Naismith Memorial Hall of Fame, an honor his fellow coaches argued for years was long overdue. Though hospitalized in the summer for heart problems and weakened by a variety of ills, he went on stage with a walker at the induction ceremony.

"I knew right from day one I wanted to be a coach," Tarkanian said. "Coaching has been my entire life."

Tarkanian had been hospitalized three times in the past 10 months. He had a second heart attack in April 2014 and was treated for pneumonia in November.

He had a 729-201 record in a career that spanned 31 years with three Division I schools, beginning at Long Beach State and ending at Fresno State, where Tarkanian himself played in 1954 and 1955. Only twice did his teams fail to win at least 20 games in a season.

But it was at UNLV where his reputation was made, both as a coach of teams that often scored in the triple digits and as an outlaw not afraid to stand up to the powerful NCAA.

He went 509-105 in 19 seasons with the Runnin' Rebels before finally being forced out by the university after a picture was published in the Las Vegas Review-Journal showing some of his players in a hot tub with a convicted game fixer.

UNLV was already on probation at the time, just two years after winning the national title and a year after the Runnin' Rebels went undefeated into the Final Four before being upset in the semifinals by the same Duke team they beat by 30 points for the championship the year before.

Mike Krzyzewski, whose Duke team scored the stunning upset of UNLV in the 1991 national semifinal, said Tarkanian "had an uncanny ability to take star players, and mold them into cohesive and selfless teams."

"As coaches, we admired him as well," Krzyzewski said in a statement. "His teams were a joy to watch, unless you were playing against one of them. He taught pressure man-to-man defense as well as anyone has ever done.''

Even after losing four of his starters off that team and being on probation, Tarkanian went 26-2 in his final year at UNLV.

Tarkanian's style evolved as he was able to recruit better players, and the Rebels were all about running and shooting. But the core of his high-flying offenses was great defense, and Tarkanian drilled them constantly in practice to commit to nonstop pressure and create turnovers.

That was also the way Tarkanian approached his dealings with the NCAA. His program at Long Beach State was put on probation after he left for UNLV and it wasn't long before UNLV was also on probation and the NCAA was demanding Tarkanian be suspended for two years. But he sued to overturn the penalty and remained as head coach, though NCAA investigators became a common sight in Las Vegas over the years.

Tarkanian liked to tell the story about the time one of his assistants saw an NCAA investigator renting a car at the airport and followed him to a local strip club. Tarkanian got some brochures for the club and mailed them to the investigator, telling him there was a special going on.

"The one thing I've done is I've fought them the whole way, I've never backed down," he said. "And they never stopped."

He was hired at Long Beach State in 1968 and went 23-3 in his first season, then led the school to four straight NCAA tournament appearances, including the 1971 West Regional final, where Long Beach led UCLA by 12 points at halftime only to lose by two. While at Long Beach he got into his first dispute with the NCAA, writing a newspaper column that questioned why the organization investigated Western Kentucky and not a powerful university like Kentucky.

Never shy about challenging the NCAA, Tarkanian once famously said: "The NCAA is so mad at Kentucky, it's going to give Cleveland State two more years' probation.''

By the time he moved to Las Vegas in 1973, Tarkanian was considered one of the rising coaching stars in the country. He quickly built a name for what was then a small school and by his fourth season at UNLV he had the Runnin' Rebels in the Final Four, where they lost 84-83 to North Carolina. It would be another decade before UNLV made the Final Four again, and the Runnin' Rebels were in three in five years, including the national championship in 1990.

In the final that year, UNLV used its pressure defense to blow out Duke 103-73 in one of the most dominant performances in championship game history.

It all happened with Tarkanian on his chair courtside, chewing on a moist towel that was always left carefully folded underneath his seat. The towel chewing, Tarkanian would later say, was something he started doing during long practices when he could not stop to go to a drinking fountain.

After being forced out at UNLV, Tarkanian briefly coached in the NBA, going 9-11 with theSan Antonio Spursbefore being fired in a dispute with ownership. Hewould later return to Fresno State, where he had six straight 20-win seasons before finally retiring in 2002.

In 2013, UNLV announced that Tarkanian would be honored with a statue outside the 18,500-seat campus arena his program built. Tarkanian was a fixture at UNLV games in his later years, watching from a sideline seat next to the court that was named after him.

The city of Las Vegas lowered its flags to half-staff at City Hall on Wednesday in tribute to Tarkanian.

Tarkanian is survived by his wife, Lois, a Las Vegas city councilwoman, and four children, including Danny Tarkanian, who played point guard for his father for three years in the early 1980s.

Remembering Jerry Tarkanian
Hall of Fame coach Jerry Tarkanian, who accumulated 729 victories over 31 years as a Division I basketball coach, died Wednesday at the age of 84.

Tarkanian A True One Of A Kind
Andy Katz reflects on longtime UNLV coach Jerry Tarkanian's life, legacy and Hall of Fame career. 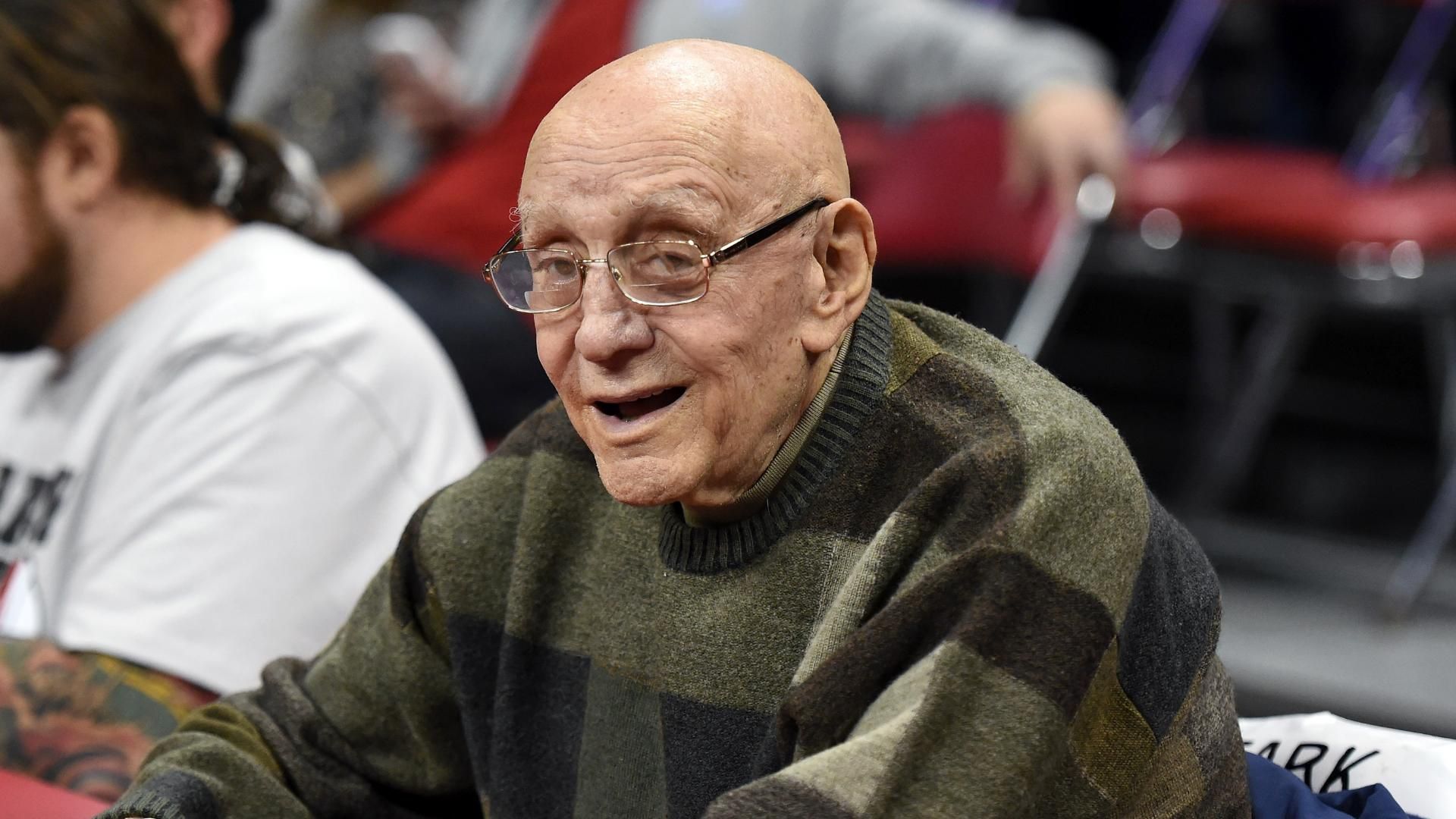 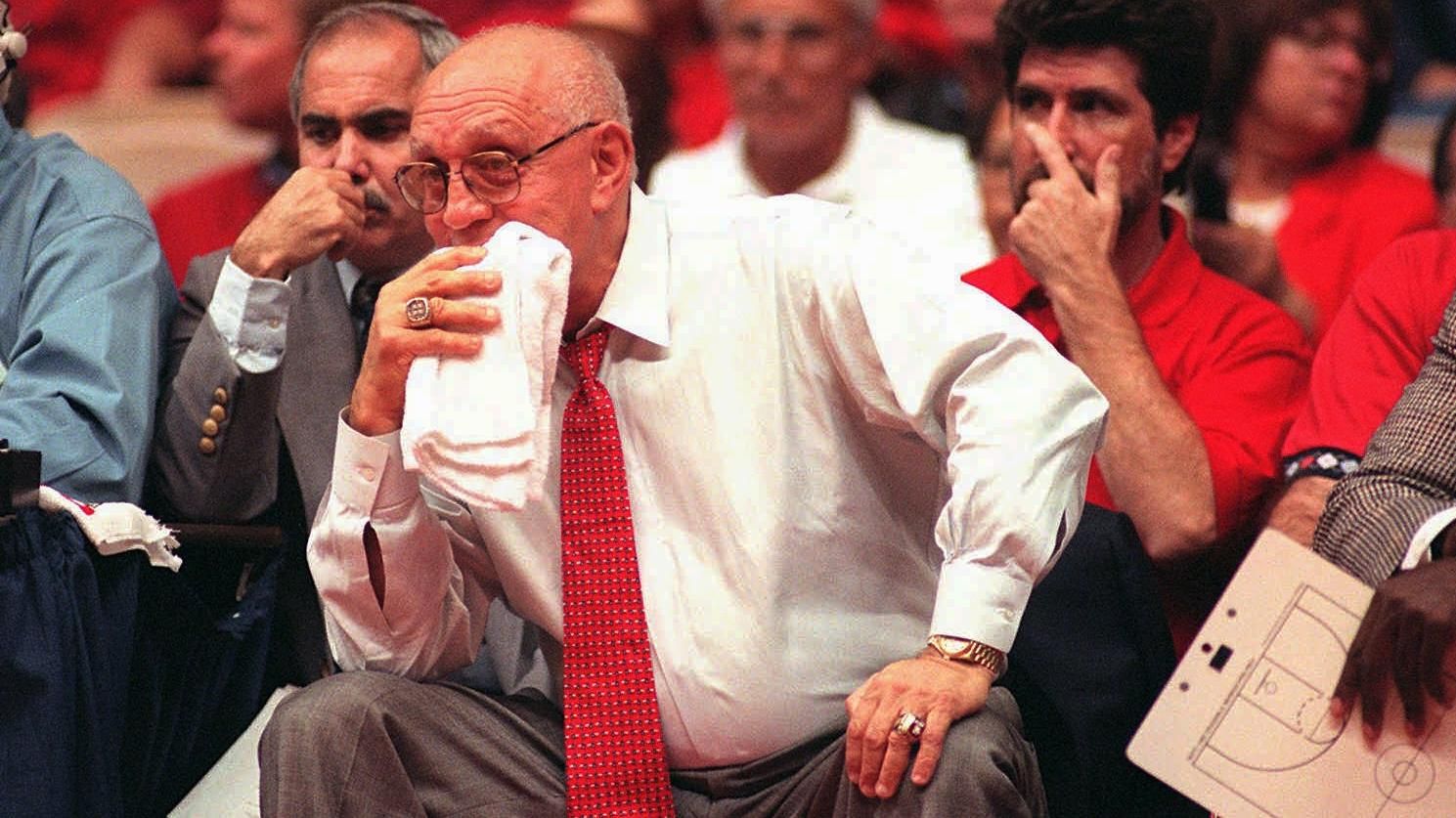