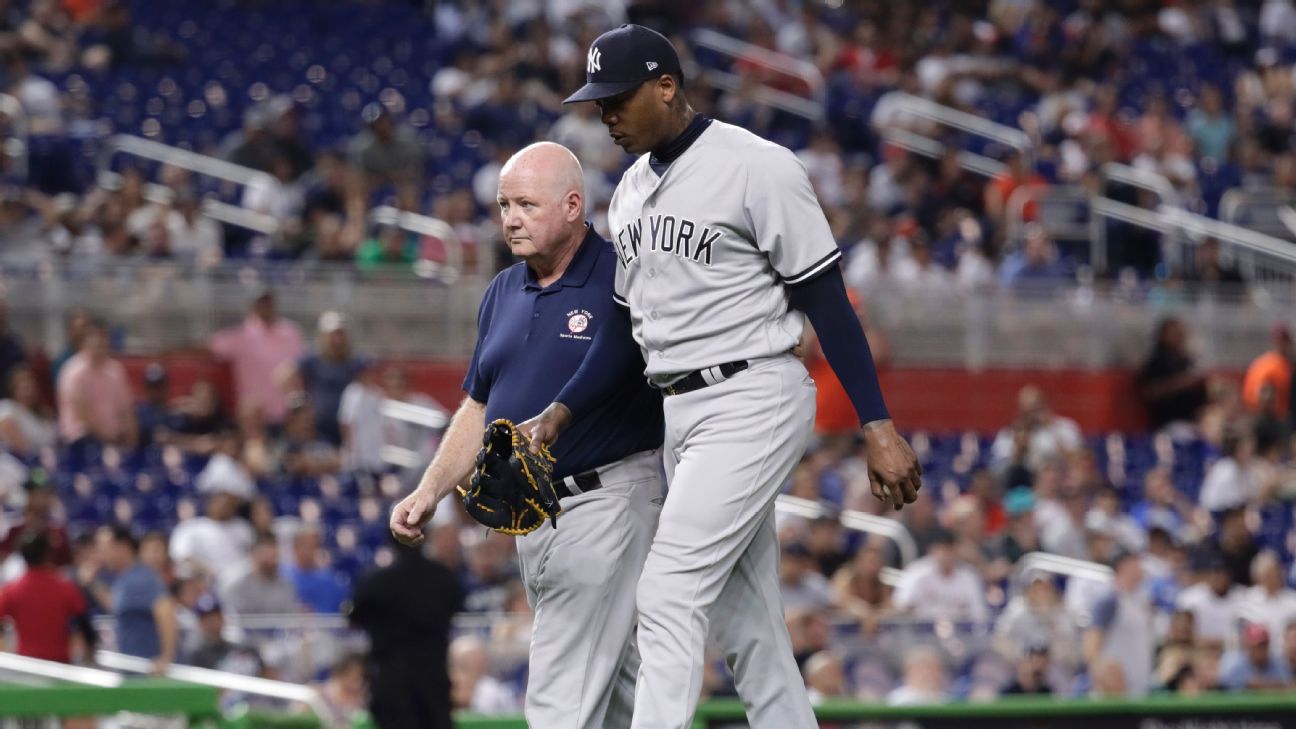 The left-handed flamethrower, who has pitched through knee problems for much of the season, departed after throwing just six pitches in a relief appearance against the Miami Marlins.

"Same spot as he felt before, so we just got him out of there," Yankees manager Aaron Boone said. "We'll get all the testing and stuff done [on Wednesday]."

After walking the inning's leadoff hitter, Isaac Galloway, Chapman threw another ball to the Marlins' next hitter, Rafael Ortega, before motioning to the Yankees' dugout. A brief conversation between Chapman, Boone, team trainer Steve Donohue, interpreter Marlon Abreu and Yankees infielders ensued on the pitching mound.

Following the short conference, Chapman, who has been dealing with left knee tendinitis for much of the season, came out of the game and headed back to the dugout and up the stairway to the Yankees clubhouse for observation.

"[The pain] was more than usual," Chapman, who is from Cuba, said through Abreu. "That's why I decided to call the trainers out. It's more than what I encountered lately."

It was the sight of Chapman motioning to the dugout that was most worrisome for Boone.

"Usually, it's not really an issue for us," Boone said. "But for him to call us out there, obviously we needed to get him out of there.

"He has managed it so well this year. We haven't seen it affect him. For him to call us out where it was affecting him, yeah, it is a huge concern. A huge part of our club, of huge importance to the back end [of the bullpen]."

Chapman said he felt some discomfort in the knee while warming up, but the pain worsened while he was in the game, prompting him to call for the trainers.

"Discomfort is constant when I'm pitching, and I use my legs, put my effort on my legs and knee, and then you feel it more," Chapman said.

Known to register triple digits on the radar gun, Chapman topped out at 97.1 mph in the six pitches he threw. Altogether, his pitches averaged 96 mph. Per ESPN Stats & Information research, that's his lowest average velocity in a game since 2013.

Right-handed reliever Tommy Kahnle replaced Chapman and finished the 12th inning to pick up the save.

After the game, Boone said right-hander David Robertson was not available because of a tender shoulder.