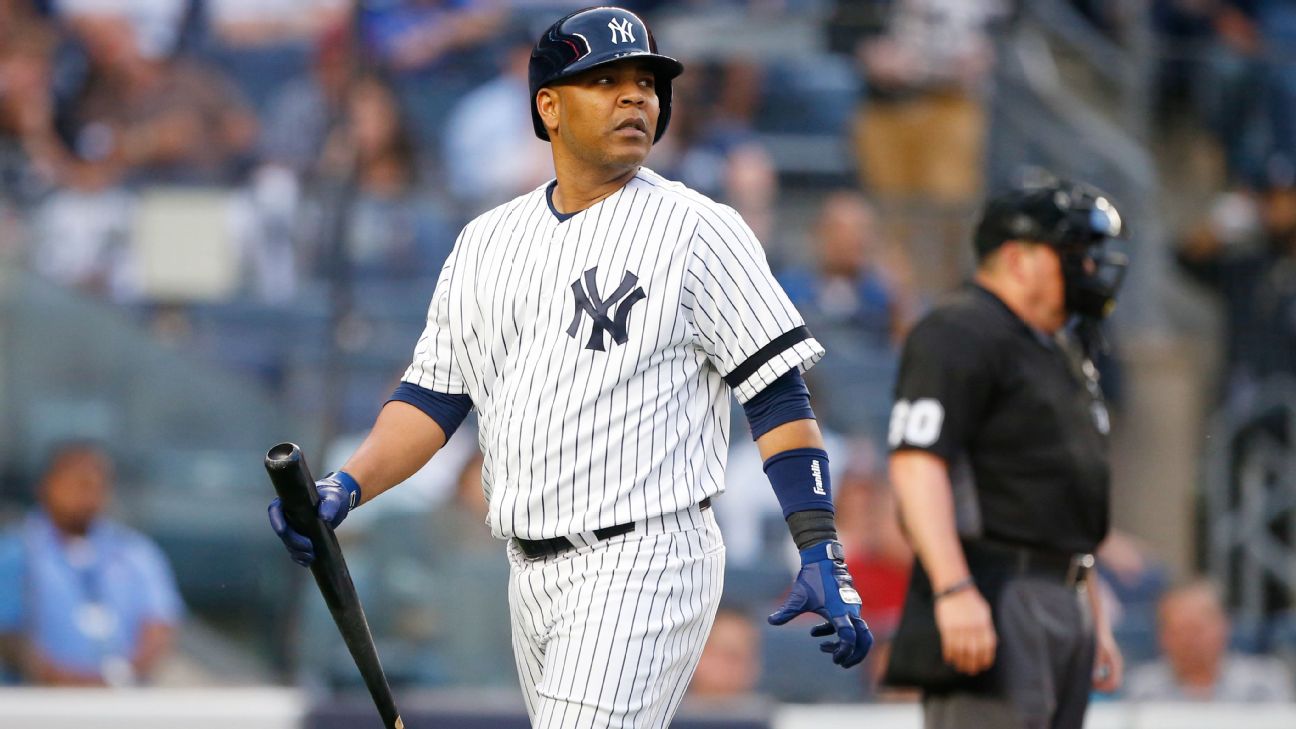 NEW YORK --New York Yankees slugger Edwin Encarnacion homered in his return from the injured list Tuesday, blasting a two-run shot in the seventh inning against the Texas Rangers.

Encarnacion was the latest player activated off the 17-player-deep IL, where he had been since early August after being hit with a pitch on the right wrist.

Encarnacion was in the Yankees' lineup on Tuesday, batting fifth, after missing a month of play since being diagnosed with a hairline fracture in his right wrist. Following a slow start since coming over from the Seattle Mariners in a mid-June trade, Encarnación went 24-for-71 (.338), with five home runs in his previous 18 games with the Yankees before going on the IL.

The three-time All-Star served as designated hitter against the Rangers and finished 2-for-4 in the Yankees' 10-1 win.

The 36-year-old Encarnacion told reporters before the game that he has no lingering pain and that he's happy to be back with the Yankees. He missed 30 games after suffering the injury Aug. 3 against the Boston Red Sox.

"I think you guys know how I feel about him and the dimension he brings to our lineup, so excited to have him back,"Yankees manager Aaron Boone said. "I know he's been feeling good now for a while. Excited to have him right back in the middle of our order."

Boone said Encarnacion has no restrictions.

The Yankees are now hopeful that the next name to come off the injured list will be right-hander Luis Severino. On Tuesday, Boone said he was encouraged by Severino's first minor-league rehab start Sunday, but refused to put a timetable on his return.

"In a lot of ways, it's spring training. And that outing for Sevy the other day, that's his first spring training outing, sort of," Boone said of Severino's first rehab start, in which he pitched one-plus innings in Triple-A, allowing two runs and three hits, including a home run. The hard-throwing starter's fastball sat between 94-96 mph.

"The biggest thing is getting him built up and hopefully he can continue to build up when he does get here and get a handful of games to where he gradually gets that sharpness that we know he's got in there," Boone added.

Severino said he expects he'll be ready to come off the injured list after his next start on Friday at Triple-A Scranton/Wilkes-Barre.

"We'll see how I feel after the second [rehab start], but if I see all my pitches are working good, I think after that, if they want me to throw another one down [in the minors] I will do it. But after that [outing on Friday], if I feel good I think I'm ready to pitch in games [in the majors]," he said.

Reliever Dellin Betances also impressed Boone on Tuesday, going through a simulated game in the Bronx, ahead of what is expected to be his first appearance of the season after being down with right-shoulder impingement and a lat strain.

"I thought he looked really good. It was really exciting today to see [Betances] throw the ball the way he did," Boone said. "The command was good; the stuff looked good. We'll see how he bounces back tomorrow. If everything goes well, then he could be out pitching maybe with [Severino] this weekend and go from there. But today was a good step for him, no doubt."

Betances was pleased with his efforts, and affirmed that his stuff was good enough to get outs against major league hitters, which hasn't happened all season.

"I could get guys out with what I threw today. Except Giancarlo [Stanton] hit one that was really good. But then I struck him out, so we're even," a smiling Betances said after facing teammates Stanton and Tyler Wade in a sim game Tuesday afternoon.

"Felt the best I've thrown so far," Betances added. "Definitely encouraged with the way I threw today. Was pounding the strike zone with both pitches, so that was good. The breaking ball was good, that's the most I've thrown it for strikes and my fastball's good. I threw a lot of strikes, so that's all I care about."

It wasn't all good news for Yankees' pitching on Tuesday. Left-hander CC Sabathia, who is now on his fourth trip to the IL, had his surgically-repaired right knee drained and received treatment for inflammation over the weekend. But the 39-year-old's return remains uncertain in the final weeks of what he has said will be his last season in professional baseball.
Report a correction or typo
Related topics:
sportsespnmlbnew york yankeesedwin encarnacion
Copyright © 2022 ESPN Internet Ventures. All rights reserved.
TOP STORIES
NYPD officers identified after 1 killed, 1 injured in Harlem shooting
5 NYPD officers have been shot since the start of 2022
Booster shots needed against omicron, CDC studies show
AccuWeather: Sunny but cold
Truck with 100 monkeys crashes, 1 still on the loose, police say
COVID testing company sued over alleged scheme
Anti-mask parent threatens to bring guns to school: 'Loaded and ready'
Show More
NYC investigating after 3 dogs die following visit to same park
Alleged child predator arrested during FBI sting in NYC
NY school mask mandate could be ending, state positivity under 10%
Vigil marks birthday of 1-year-old girl shot in the face in NYC
'He didn't deserve that': Family mourns slain NJ honor student
More TOP STORIES News