Yankees' Frazier looks to 'do damage' after recall 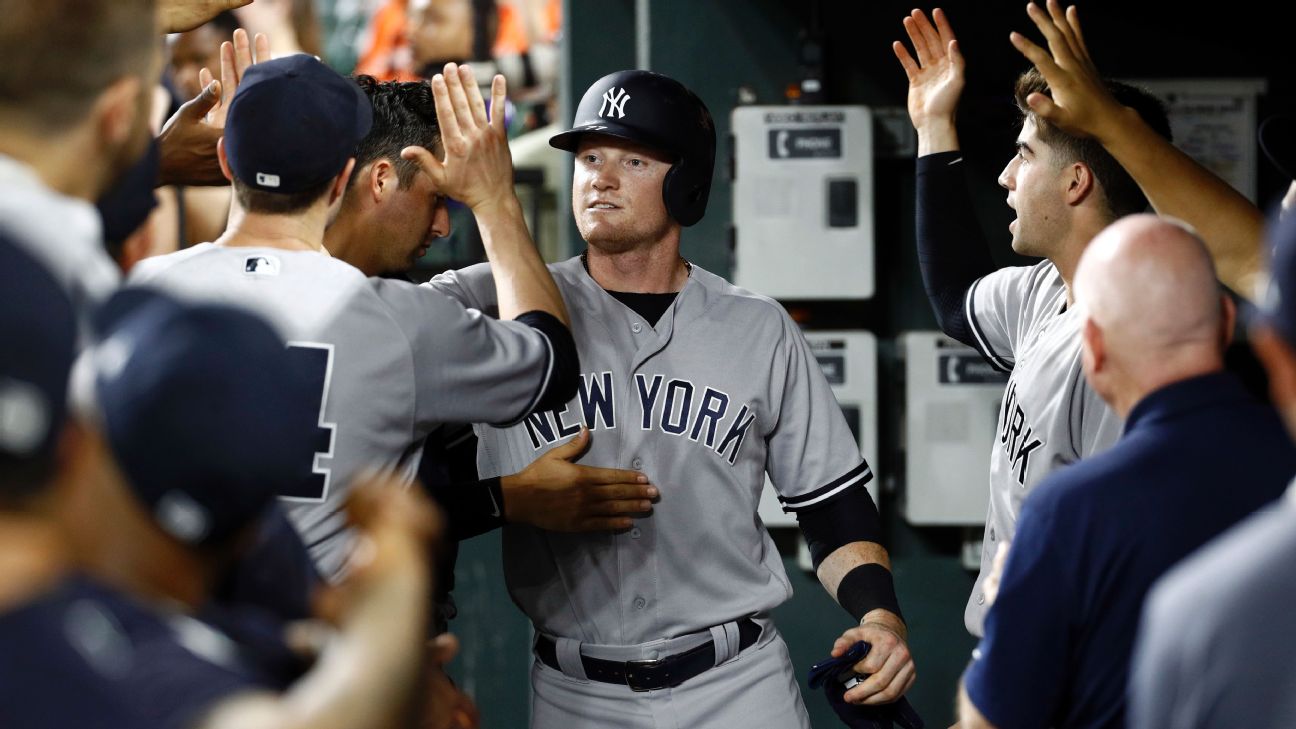 NEW YORK -- A clubhouse attendant carried a box of Nike sneakers into the Yankees' clubhouse and began unloading them into a locker marked for No. 77 early Sunday.

Clint Frazier is back in the Bronx, and he's hoping to pick up where he left off -- in the batter's box, at least.

"Same as it's always been," he said. "Just go out there and try to do damage."

The Yankees recalled the brazen young outfielder from Triple-A before Sunday's game against Oakland, more than two months after sending him down amid a roster crunch.

Frazier's call-up comes as rosters expand for September. He hit .283 with 11 homers and an .843 OPS in 53 games with New York this season, becoming a fan favorite for his powerful swing and flashy, custom-made footwear -- he had pictures of his mom's cats painted onto a set of spikes for Mother's Day. Then he made several embarrassing miscues in the outfield, leading to hearty boos at Yankee Stadium.

Frazier, 24, was demoted in mid-June and called it a "tough pill to swallow." The move came after the team acquired slugger Edwin Encarnacion and with Giancarlo Stanton and Aaron Judge nearing returns from injury. Frazier has been with Scranton/Wilkes-Barre since, even as the Yankees' injury woes continued. The club has set a major league record with 29 players on the injured list this season.

The confident redhead was frustrated by the demotion -- he even deleted all Yankee-related items from his social media -- but said he wasn't stunned to be left in Scranton/Wilkes-Barre for so long.

"I guess nothing surprises you really anymore," he said. "I'm just happy to be here right now."

Frazier was in the lineup Sunday, batting eighth as the designated hitter. He went 0-for-2 with a walk and was pinch hit for in the bottom of the ninth. His replacement,Mike Ford, hit a walk-off homer to give the Yankees a 5-4 win.

"Obviously, have an opportunity to come back and help a really good team be a little bit better maybe," Frazier said. "Just trying to do my part. Whatever that is, I'll do it."

New York tasked Frazier with improving his defense. His demotion came two weeks after he made a trio of misplays in a Sunday night game against Boston.

"The defensive part of it, he continues to work hard at," manager Aaron Boone said. "We know he has the capability. Now, hopefully he'll come up here and continue to impact us like he did when he was here."

Frazier declined to speak with media after the Red Sox game, and he was unapologetic about refusing to comment, an approach that didn't thrill the Yankees. Frazier was a target of trade speculation while New York sought starting pitching at the July 31 trade deadline, but a deal never materialized.

The right-handed hitter batted .243 with eight homers and a .731 OPS in 60 games at Triple-A. He slumped badly following the demotion but has been hitting better recently.