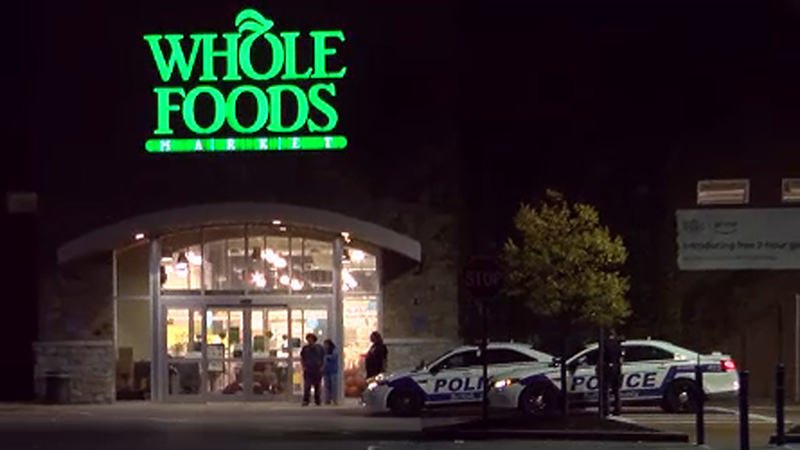 LAKE GROVE, Long Island (WABC) -- A woman was carjacked at gunpoint in a Whole Foods parking lot on Long Island Monday night, according to police.

It happened just after 10:30 p.m. at the location on New Moriches Road in Lake Grove, as the victim was waiting to pick up her boyfriend from work.

Authorities say 23-year-old Stephanie Rodriguez was sitting in her car when a man approached her and asked for directions.

The suspect then pointed a handgun at her and demanded she get out of her vehicle, police said.

"He puts the gun right here, pointing at me, and he says, 'Get out of the car,'" she said. "Once I stared at the gun, that was it. I lost any nerve of talking, or like, breathing, for that matter."

Rodriguez exited her vehicle, and the man jumped into her car and drove away.

"If I did anything other than open the door, he probably would've shot me," she said. "Like, you just don't know."

No injuries were reported, but the suspect did make off with some of Rodriguez's other belongings.

"I grabbed my phone, but I didn't get my wallet, unfortunately," she said. "So he has that. He has my house keys, my car keys, literally, my life right now."

Police are now investigating, but the shopping center -- which sits right across the street from the Smith Haven Mall -- is not a place where something like this is expected.

"It's very unusual in Suffolk County for something like that to happen," police Commissioner Geraldine Hart said. "Very unusual."

But for Rodriguez, who thought nothing of assisting someone with directions, it was the most terrifying moment of her life.

"Lord knows I've asked people plenty of times," she said. "Like I'll be at a red light, 'Can you tell me where this is?' And they'll be like, 'Just keep going this way.'"

It was a frightening reminder to think twice if someone approaches your car window in a parking lot, especially at night.

Detectives are asking anyone with information on the robbery to contact the Fourth Squad at 631-854-8452 or Crime Stoppers at 800-220-TIPS.

All calls will be kept confidential.