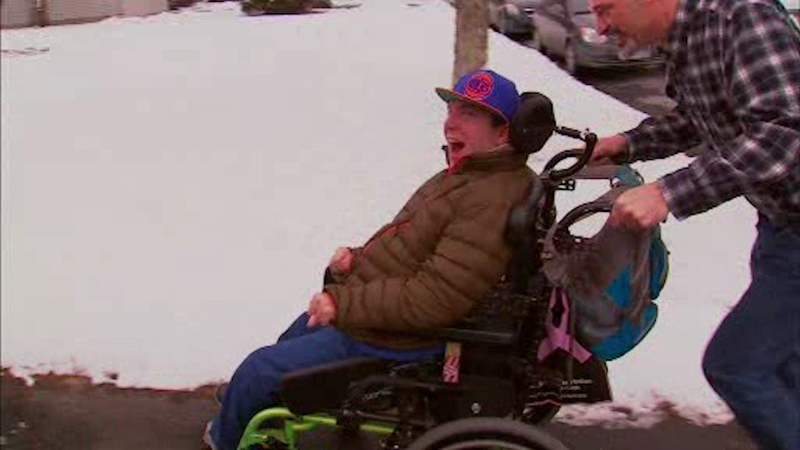 STRATFORD, Connecticut (WABC) -- A father in Connecticut is desperate to find the culprits who stole his family's special van used to transport his son.

Jamie McDowell now arrives home in a wheelchair-accessible van. The transportation is provided by a day program he attends during the week.

But what's missing from the driveway in Stratford is the family's own customized van. It was stolen last Friday.

"It was like a violation because we've been here about 12 years and nothing like this has ever happened as far as I know in the neighborhood," said James McDowell, theft victim.

McDowell is 24, has cerebral palsy, and is non-verbal.

His father says the van cuts down on them manually having to lift Jamie in and out his wheelchair for trips to doctor's appointments and other activities.

The two regularly attend sporting events in Bridgeport where Jamie has run the bases at the minor league ballpark, and even met the Harlem Globetrotters.

"It's kind of created a hardship in that the only means of transportation that we have now are like accessible taxis, and we've kind of been using those with mixed success in regard to them showing up in a timely fashion," McDowell said.

The van is a 2003 Dodge Grand Caravan that McDowell bought used on eBay.

Insurance would cover the replacement cost of the vehicle, but it's the conversion that's costly, running between $15,000 and $20,000.

McDowell thinks perhaps the thief targeted an older model believing it was easier to steal; unaware of the impact it would have on this family.

"I can't imagine why someone would take it. I'm hoping that they didn't realize it was an accessible vehicle when they stole it, but anything's possible I suppose," McDowell said.