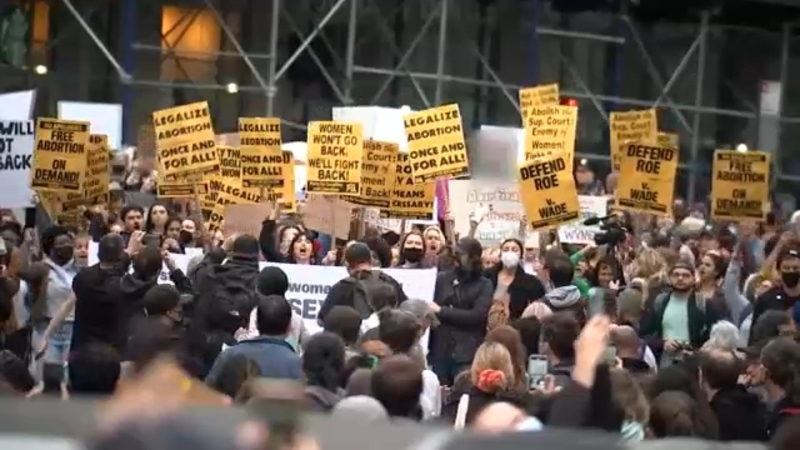 As soon as the story broke Monday night, people began gathering outside the Supreme Court, some sitting with candles, some chanting about the apparent author of the draft opinion, Justice Samuel Alito.

"Sadly, while enraging, this news is hardly surprising," New Jersey Governor Phil Murphy said. "This court, stacked with Trump appointees, could not be trusted to protect women's reproductive rights."


New York Gov. Kathy Hochul said her state would welcome those who need access to abortion.

"I refuse to let my new granddaughter have to fight for the rights that generations have fought for & won, rights that she should be guaranteed," she posted on Twitter. "Abortion will always be safe & accessible in New York."

Hochul said she is "absolutely horrified" by the court's "deeply disturbing" draft.

"As a woman, this is personal," she said. "We will not stand idly by. Anyone who needs care, we welcome you with open arms."

The governor said she's "mad as hell," making the argument that legalized abortion was an issue during her mother's generation and remains an issue in both her and her daughter's generation.

In our area, thousands of demonstrators filled Foley Square Tuesday night and blocked off traffic on Lafayette Street in protest, one of many that happened across the country.

The still pending final ruling has enraged a generation that grew up thinking access to safe and legal abortion was settled, and never imagined taking to the streets to secure what they were told was their constitutional right.

"New York City knows that a woman's right to make her own health care decisions is hers and hers alone," Mayor Eric Adams said on Twitter. "This potential assault on their freedom by right wing extremists cannot stand. We're ready to fight like hell."

WATCH | What will the reversal of Roe V. Wade mean for Americans?
EMBED More News Videos

President of the National Organization for Women of New York Sonia Ossorio breaks down what led up to this shocking draft opinion, and what the implications of a federal reversal of Roe v. Wade.

"A woman's right to control our own reproductive health choice is not only a decades-long federally protected right, but it's also an essential human right of self-determination," Adrienne Adams said. " That right has been under assault across the United States, really since day one. But here we are in the year 2022. You would think it was the year 1950...it is clear that our worst fears are coming true."

"Let's be clear: This is a draft opinion," the organization wrote. "It's outrageous, it's unprecedented, but it is not final. Abortion is your right - and it is STILL LEGAL."

"If the draft opinion made public tonight is the final opinion of the court, we wholeheartedly applaud the decision," the group Susan B. Anthony List tweeted.

Some states had already been preparing for the potential that the high court could weaken or overturn Roe, including Connecticut, which recently passed legislation protecting abortion providers in their states from lawsuits.

Governor Ned Lamont on Tuesday reaffirmed his commitment to signing the first-in-the-nation bill to protect medical providers and patients.

"I am very appreciative to the majority of lawmakers in Connecticut who had the foresight to draft this legislation at a time when the right to a safe and legal abortion in America is in jeopardy," he said. "I am proud to stand up for access to reproductive healthcare and reproductive freedom. As long as I am governor of this great state, we'll never waiver on the right to choose, and the belief that medical decisions should be made between a patient and their doctor. As soon as this bill is transmitted to my office, I will sign it into law."