WABC
HAMILTON HEIGHTS, Manhattan (WABC) -- A 34-year-old man who lived inside a Manhattan building that went up in flames late last year, displacing more than 150 residents, has been arrested and charged with arson and other offenses.

Fire Marshals arrested Jelani Parker in connection with the six-alarm fire that decimated 565 West 144 Street in Hamilton Heights on November 17. He has at least two previous arrests for criminal possession of a weapon.

He is also charged with three counts of assault and reckless endangerment.

Marshals were told that Parker rarely came out of his apartment, so they initially believed he died in the fire. But when they finally got into the six-story building, they realized he wasn't there.

They tracked him down in North Carolina, saying he boarded a bus within an hour of the fire and headed south. Marshals talked to him several times since the fire and started to build their case. They were then notified he fled to Los Angeles, and they issued a warrant for his arrest. He was pulled over in a car stop, and officers realized there was an open warrant for his arrest in connection with the fire. He was then taken into custody.

The building had a total of 42 apartments on floors two through six, with stores on the first floor. More than 250 firefighters responded to the scene, and the Red Cross was providing aid to 46 families.

Authorities say the fire started on the sixth floor and spread to the fifth floor and the roof.

The exact cause has not been released. 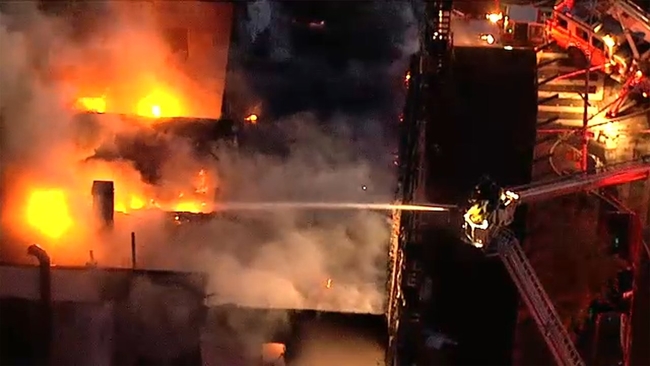