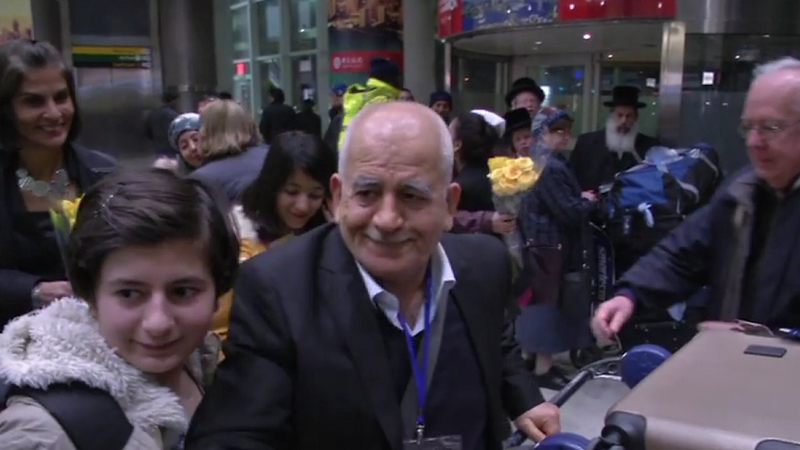 NEW YORK (WABC) -- They've been through hell, but Tuesday night the Khoja family from Aleppo, Syria is home.

Mahmoud and his wife Asia along with their six grown children will forge a new future in Union City, New Jersey.

Their new family is made up of members of the Rutgers Presbyterian Church on the Upper West Side.

"It was very touch and go. More touch than go I guess," said Dave Mammen, of Rutgers Presbyterian Church.

The church has been working around the clock to help the Khojas after President Trump signed the executive order that closed the door.

And four years after fleeing Aleppo, three years after applying for asylum, more than one year after the U.S. approved them; their flight booked for last Monday was canceled.

"We were so sad," said Suzanne Khoja, Syrian refugee.

"It's very hard when you are building your dreams on something and everything is going down," Suzanne said.

Tuesday night as they celebrated, the federal judge who put a temporary stop to the ban, a Trump administration lawyer, was standing before an appeals court trying to restore it.

"It's not like there hasn't been processes in place to take some care with people coming from those countries," the lawyer said. "The president determined there was a real risk."

President Trump vowed to take the fight to the Supreme Court if necessary, to reassert his authority.

On Capitol Hill, his Homeland Security secretary suggested that the people arriving now might intend to do us harm.

"They don't know me," Suzanne said.

The Khojas didn't want to get into the politics. They're just glad they're here. They'll be living in an apartment in Union City filled with donations to get them on their feet.

They have a whole family of Americans standing beside them.